The People Behind the Seawall (2014-ongoing)

Introduction in short
Jakarta is sinking fast. If nothing is done it is expected in 20-30 years time one third of the city will be flooded millions at lives are at stake. The project Utarakan Jakarta, The People Behind the Seawall aims to inform and raise awareness about flooding in Jakarta. It also shows the urgency to protect Jakarta against floods. The project portrays the lives of 4 people living in North Jakarta behind the seawall. It captures their struggles with floods, a sinking house and the costs of drinking water in a city on the verge of drowning.  Their worries, dreams and hopes for a better future. Through various media platforms like Facebook, Twitter, website, magazines and exhibitions. To see all stories visit the website. READ MORE at bottom of the project page for the complete background information and my personal story of making this project. Click here to see all video’s. Scroll down for a small selection of my personal favorites.

Alda, schoolgirl
In the Old Fish market Pasar Ikan lives Alda (12) with her mother and stepfather. Built 300 hundred years ago by the Dutch, now the building is falling apart. There is no sanitation and all water for consumption has to be bought. Alda and her parents are in danger of being evicted. As is her grandmother who lives in Muara Baru on the edge of waterbasin Warduk Pluit. Alda’s family from her mother’s side are from the ‘Betawi’ tribe, which is one of the original inhabitants of Jakarta. Alda just moved to Pasar Ikan after her mother married her stepfather. She does not have many friends in the area. Most of her friends live in Muara Baru or are in her school. When she is older and grown up, she wants to become a policewoman. 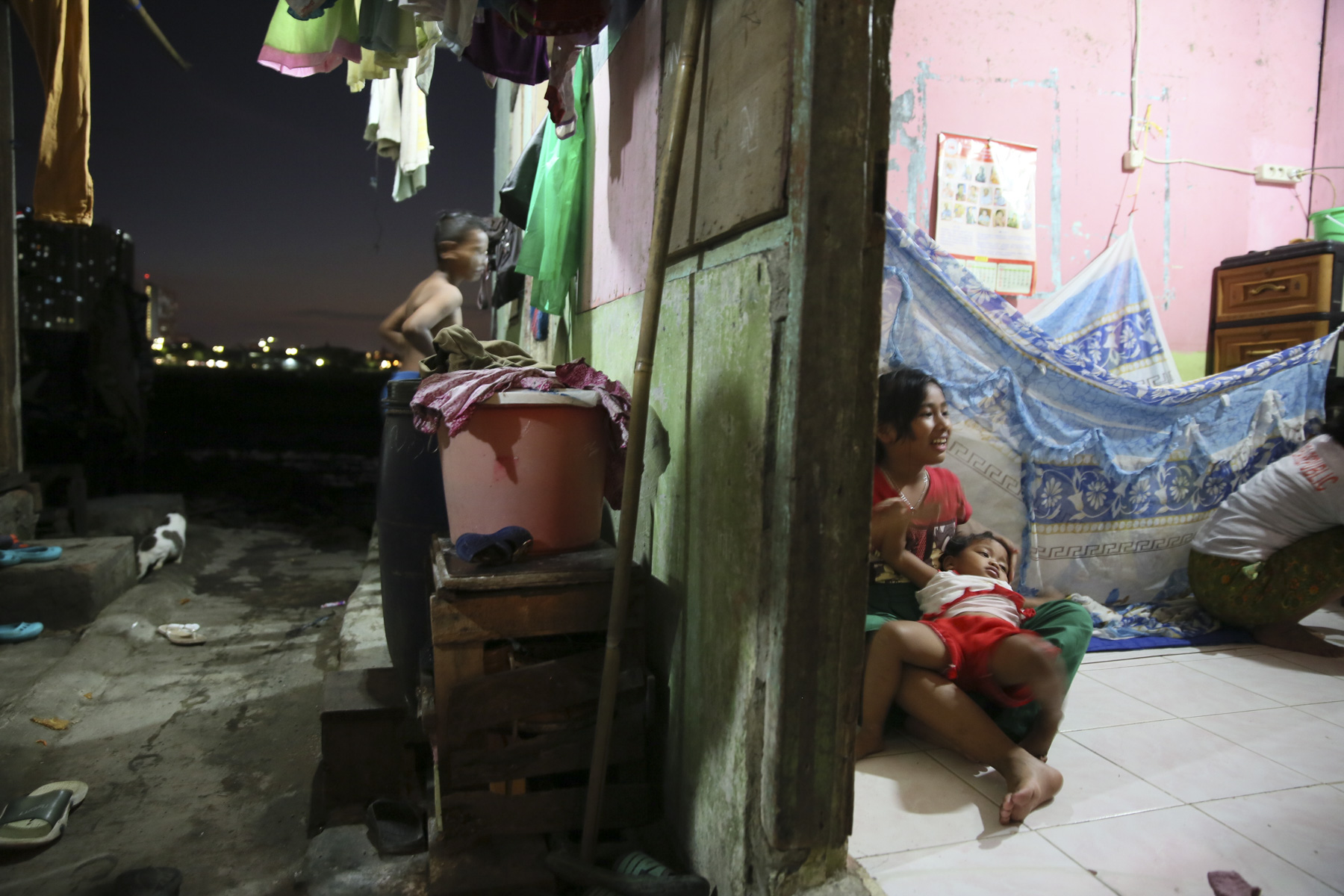 At the edge of waterbasin Warduk Pluit is Alda’s great grandmothers house. It is illegally built and evictions awaits the community. The house of her neighbour was demolished earlier that day. 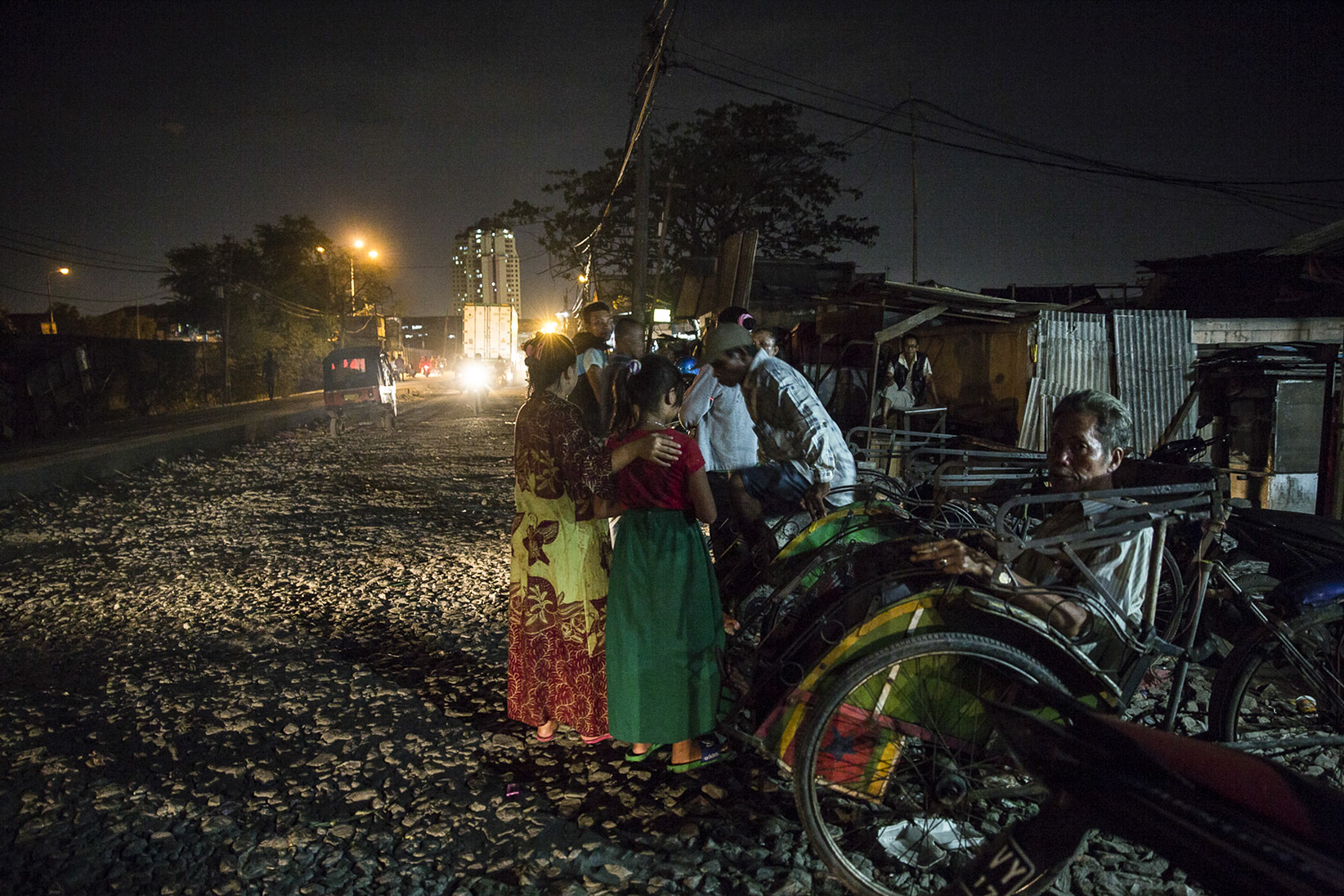 Alda and her mom on their way home from a family visit. 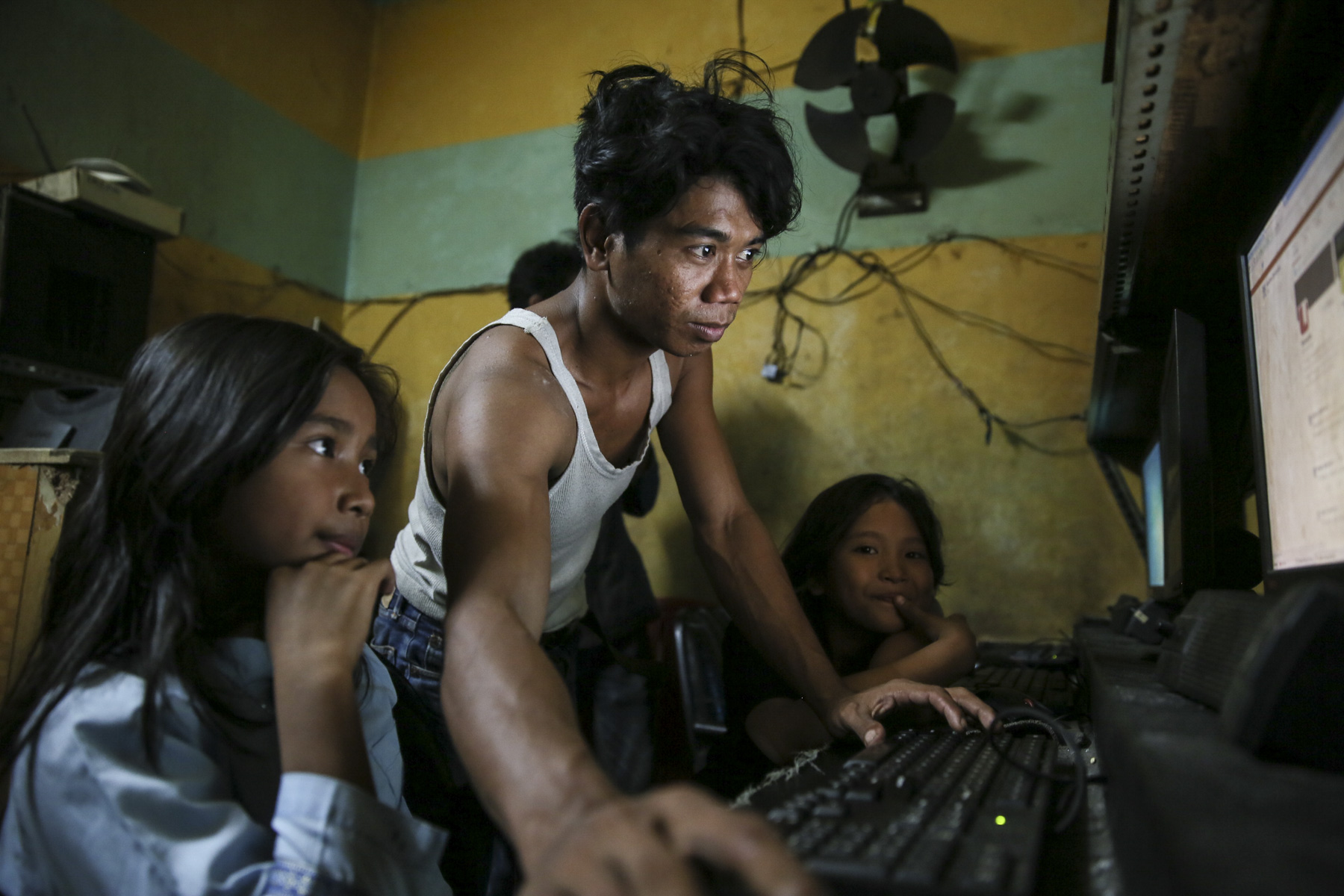 After school Alda goes to a local internet cafe. There are around 10 computers, it is free for kids of the area to use. She likes to study and know more about computers. 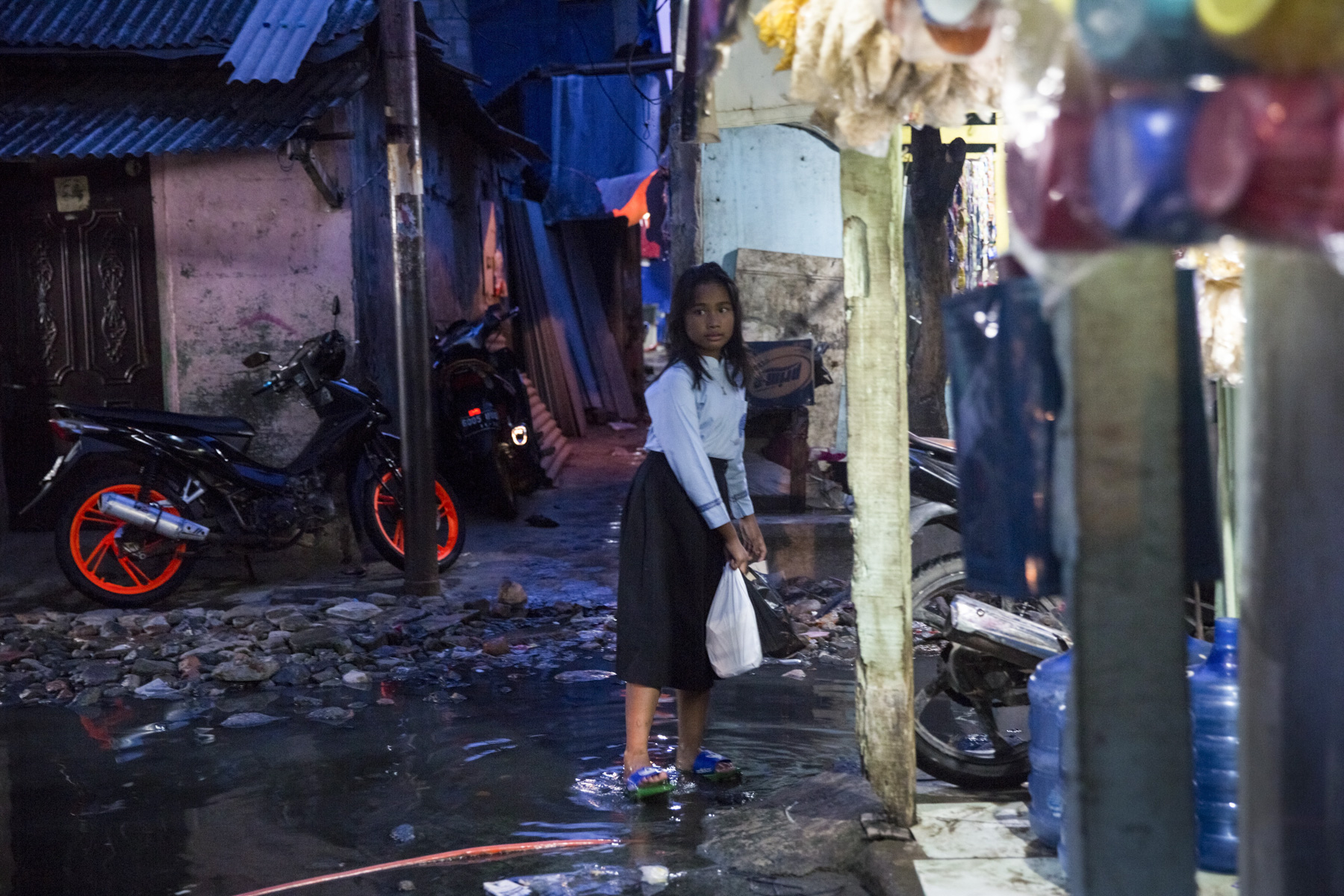 When visiting her grandmother, Alda has to walk through streets that are often flooded. Often the water stays for weeks in this low lying area of Jakarta. With no garbage disposal system the smell is disgusting. And the water is infested with bacteria and diseases.

Lukman, fisherman
Lukman is a fisherman, who lives with his family in an elevated house on the outer side of the sea wall in Kampung Pojok in North Jakarta. His house stands above the water every year he has to raise it with 25 centimers. The surface of the sea keeps rising because Jakarta is sinking. Lukman loves being an independent fisherman and is concerned about the problems of chemical waste in the sea. It affects his catch and makes the seawater polluted. He has to go miles into the ocean to find pollution-free waters. His wife Rifka and daughter Lilis share his lighthearted and laid-back attitude towards things. They joke about their lives, their danger of being evicted, and the amount of garbage below their house, which, according to his wife, is “an income floating around”.

Mr Lukman is a fisherman and lives with his family in a house built on bamboo stilts in the Bay of Jakarta. Every year he has to raise his house 25 centimeters to prevent it sinking into the sea. With a sealevel rising and sinking soil, it is a constant battle against the water. 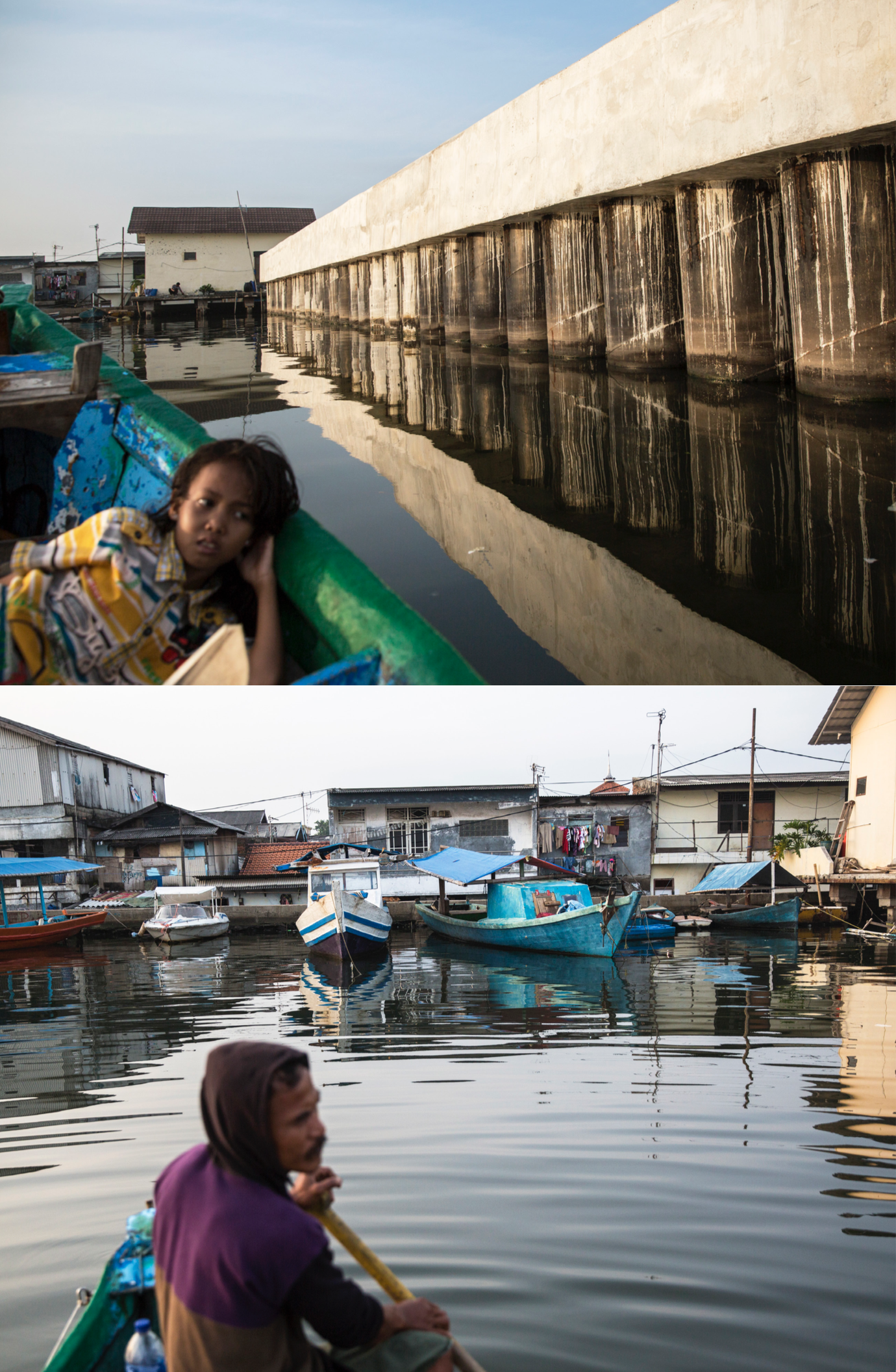 This wall is the first step in the Giant Seawall project. It should offer extra protection for the 40 year old excisting seawall that is sinking as much as 25 centimeters in some places.

Sumari, bicycle tourguide
Sumari works as an Onthel bicycle tour guide for the historical Kota Tua area. He is proud to be a tourist guide. Every day there are a lot of people from all over Indonesia in Fatahilla square; a famous open-air spot framed by colonial buildings in Old Town area. It saddens him to see what happens to this area. Old beautiful buildings are going to ruin and walls and roofs are falling down, the area still has a lot of potential to unlock. For example, he would like to see the now- defunct Kalibaru canal cleaned and working. The smell bothers his customers. His family lives in Jepara, Central Java. He started out as a bicycle taxi driver in Jakarta in 1980, he moved to the capital. His work peaks on the weekend, and he often takes Monday off to relax, wash his clothes and read books. He visits his family in Jepara every 6 weeks or so, and continues to send them money. He hopes that people in Jakarta will be proud of their city again, keep it clean and be more appreciative of its history and cultural heritage. He would like to learn English. It is quite frustrating not being able to speak to foreign tourists because sharing his knowledge is what he enjoys most. 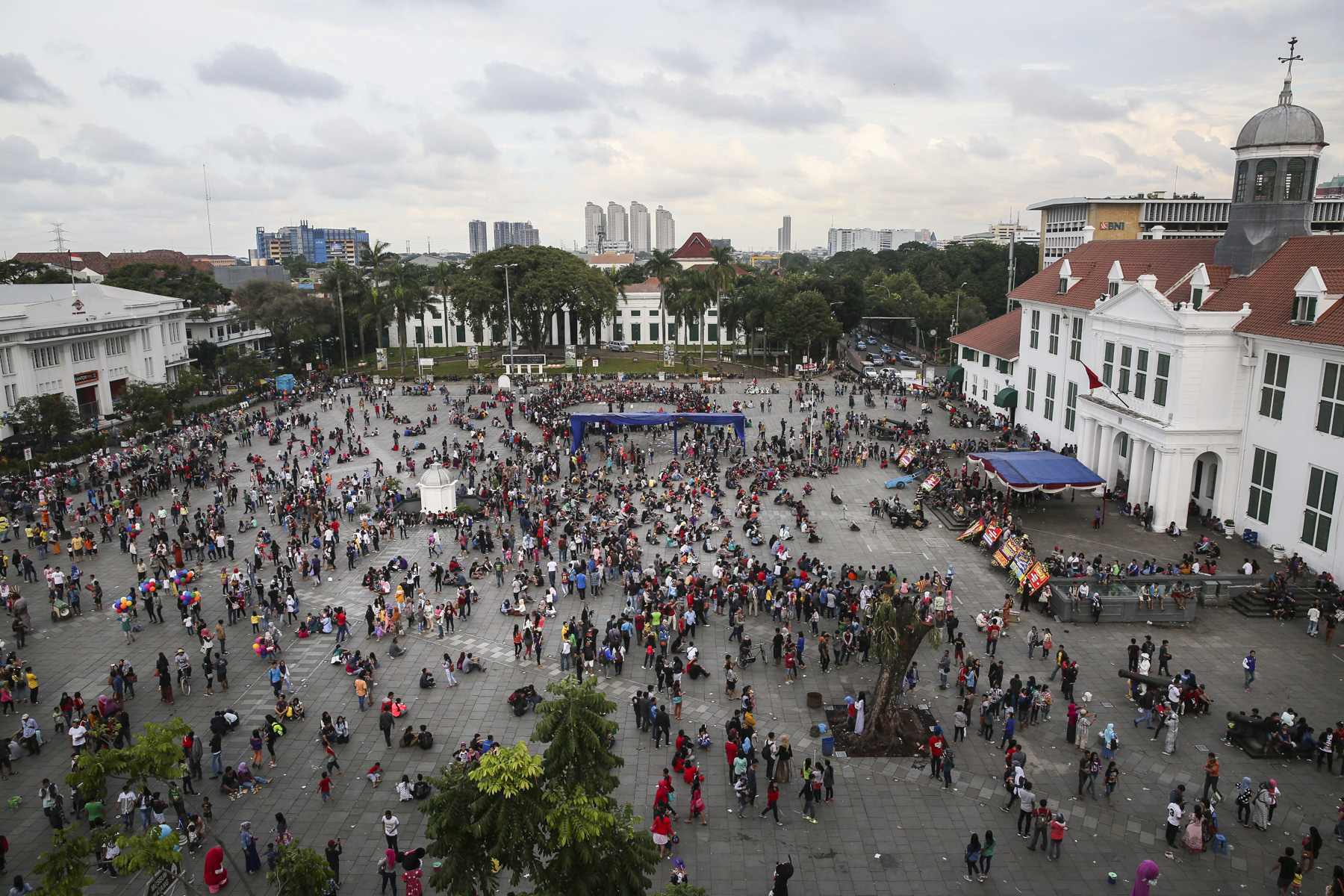 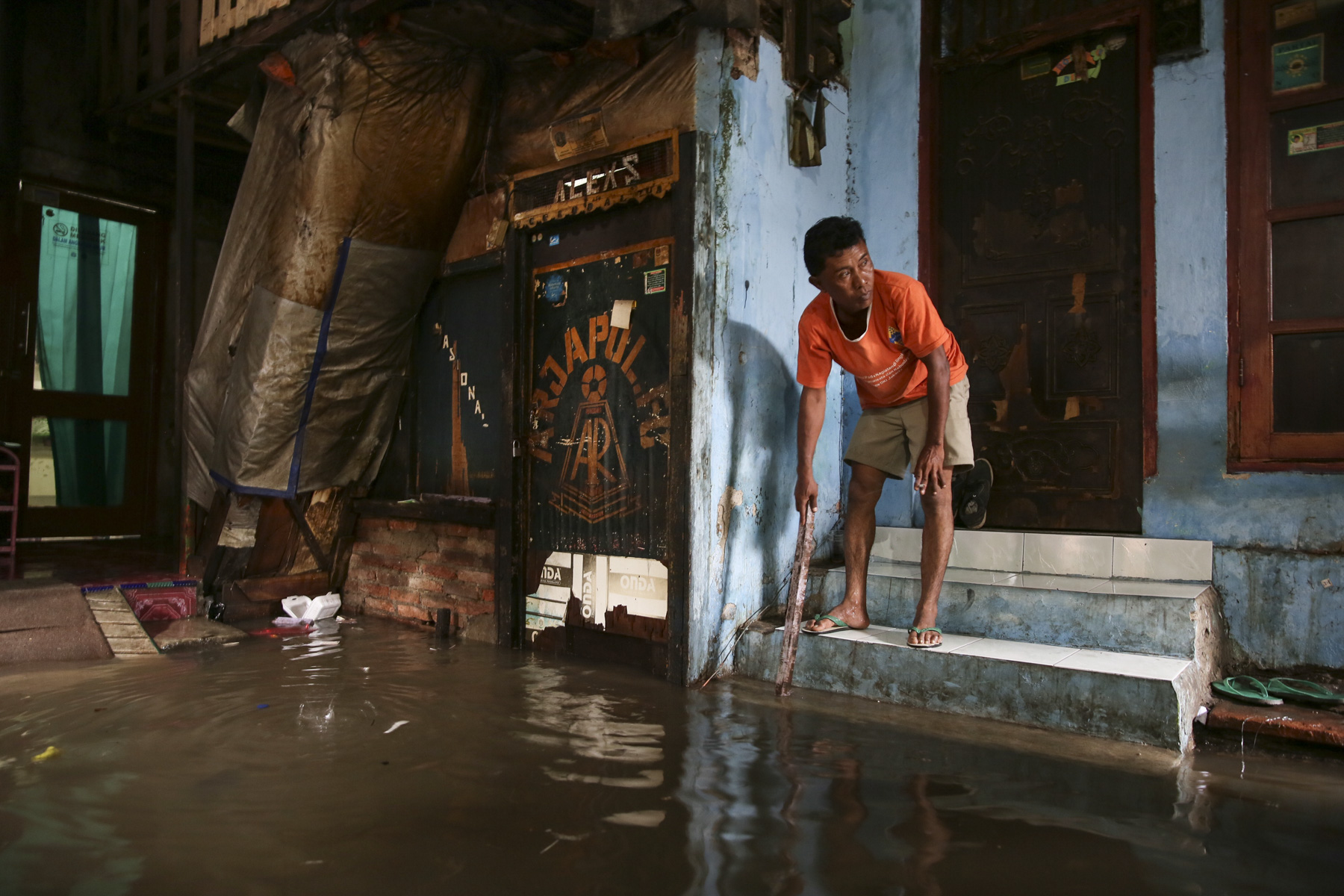 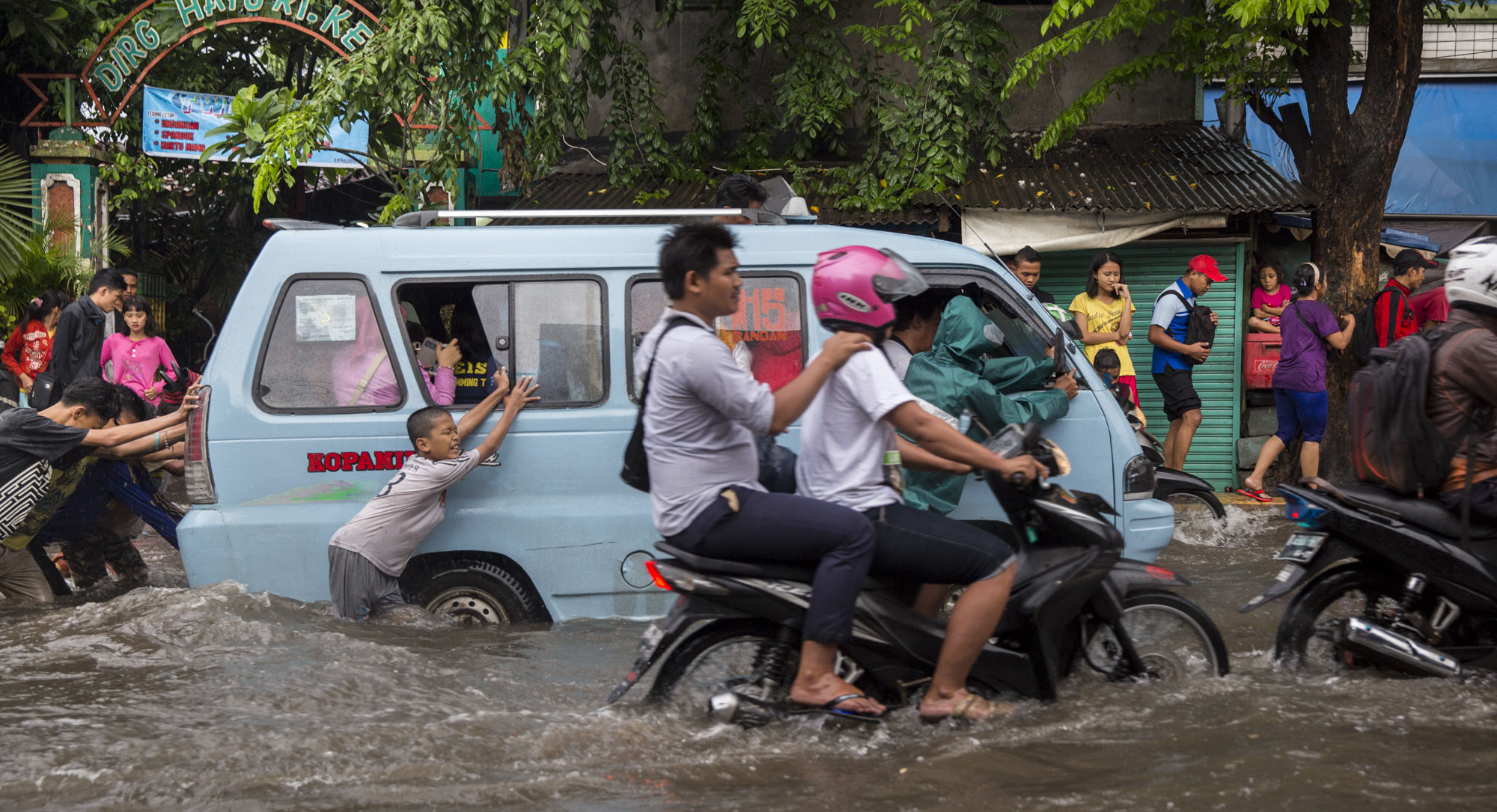 The whole city comes to a standstill and disrupts daily life. 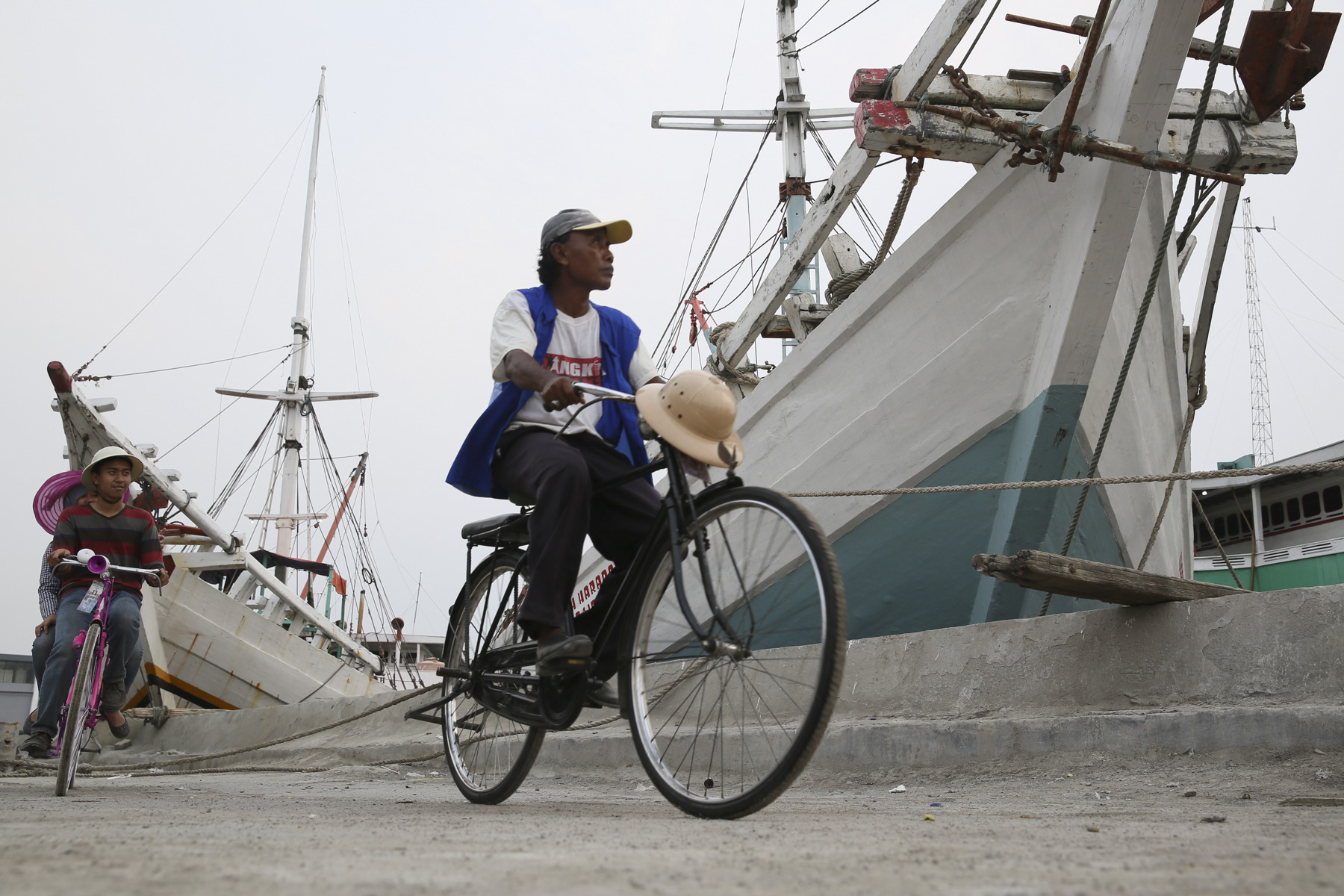 Showing tourists around the historic harbour of Sunda Kelappa.

Sarmini, jamu seller
Every day Sarmini goes to work on her motorcycle. She sells jamu (traditional herbal drink) twice a day. In the morning and late in the evening. Her customers are mostly truck drivers in transit. She is pregnant and has already 3 children, all boys. Sarmini and her husband want to work hard  to give them all a good education. To make money aside from selling jamu Sarmini is very enterprising. Her house is at the edge of Waduk Pluit reservoir, 3 rows away from the water. She rents out part of her house and let people make use of her bathroom for Rp 1000 each time. But she also collects plastic bottles and sells clothes on credit. The houses that are very near to the reservoir have been demolished. It looks like Sarmini’s house will likely be next. However, she feels that she lives far enough from the reservoir that she isn’t really disturbing the functioning of the reservoir. Unlike the 3 rows of houses that are already destroyed. Instead of evicting the people from the area, the government should try and make the area more livable. With running water and garbage management service. That is her ambition. 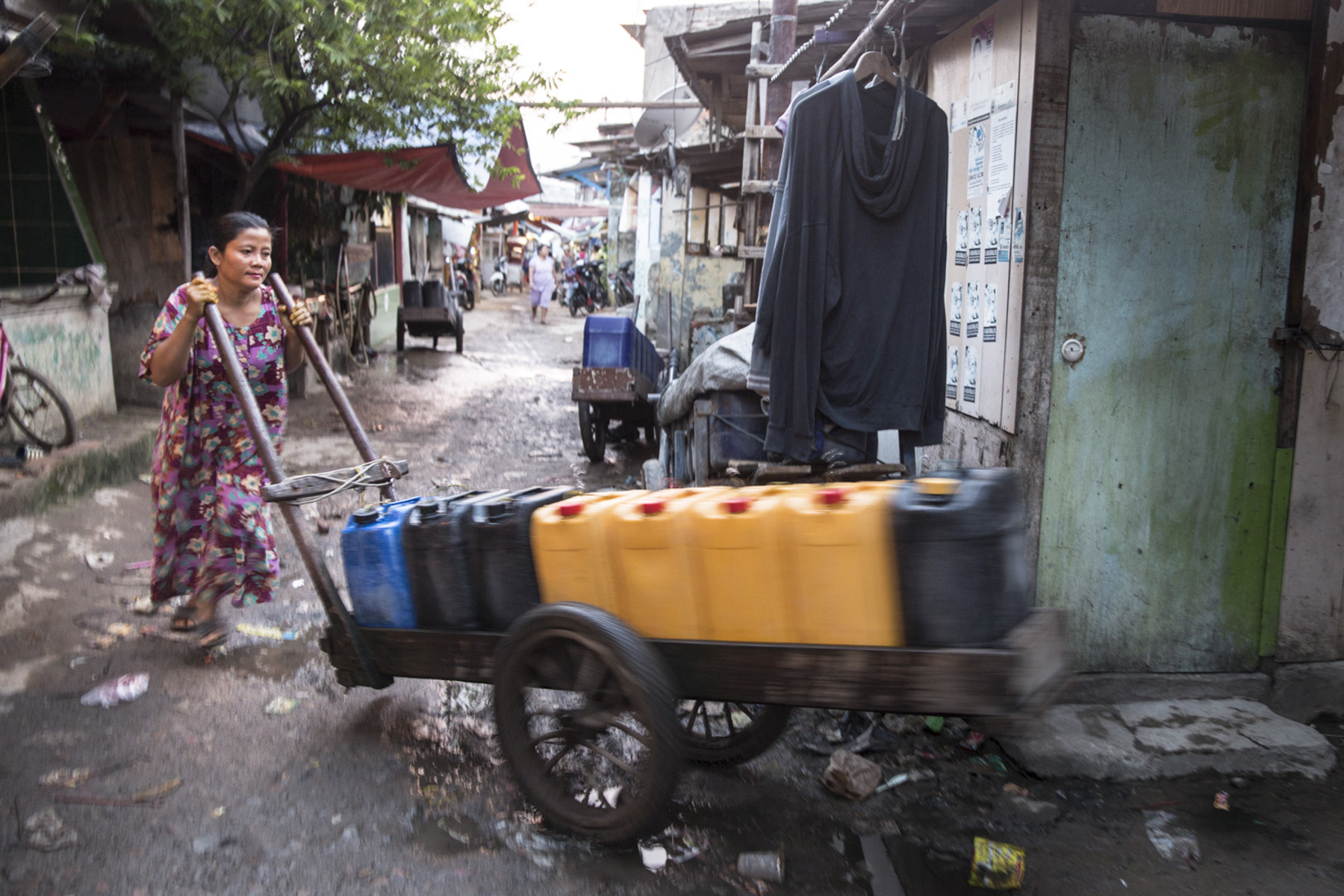 Most of the urban poor communities have no access to piped water or sanitation. Sarmini has to buy water everyday. The water is pumped up, around 200 families rely on this well. Excessive use of groundwater is causing Jakarta to sink 7,5 to 25 centimeters per year. 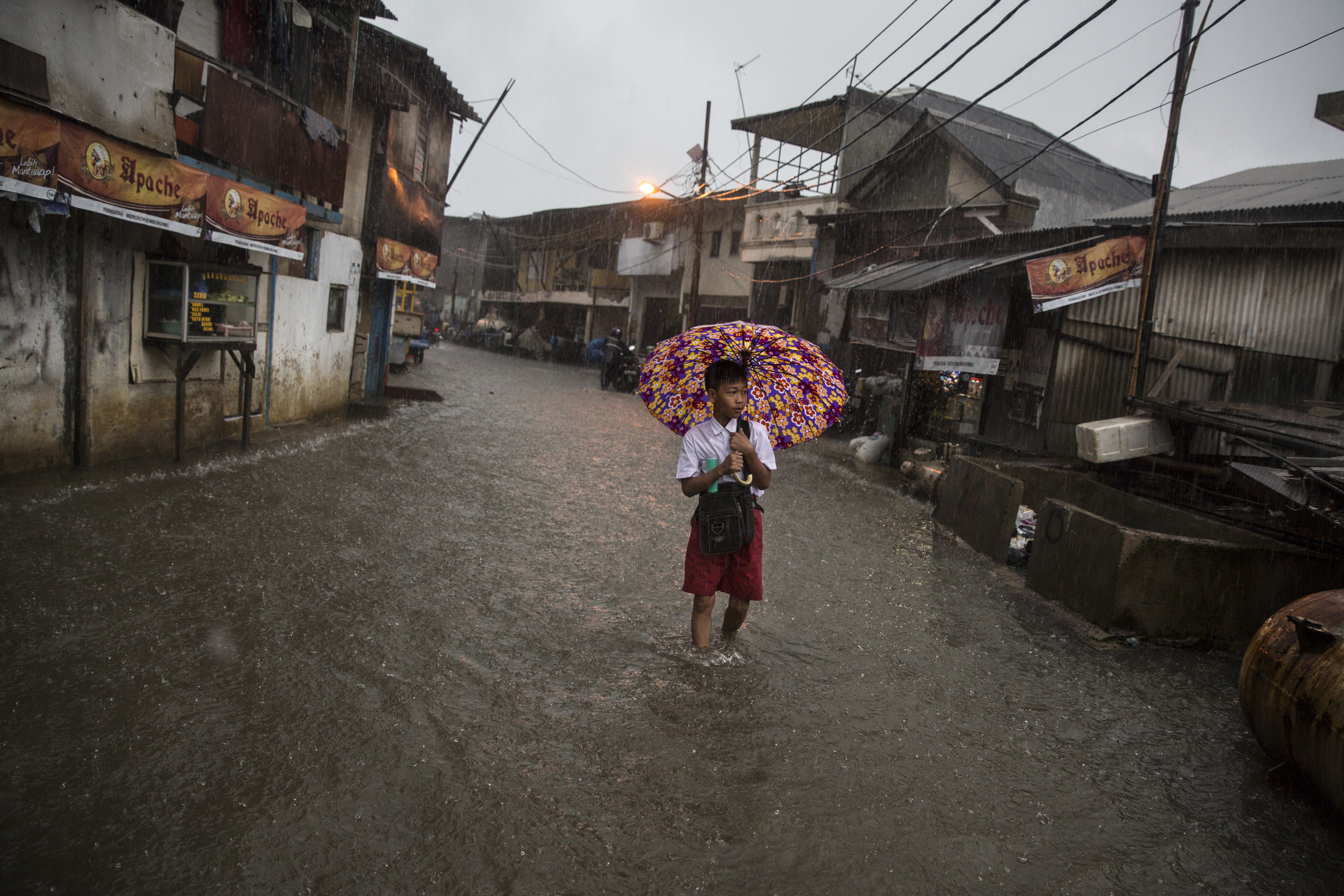 Jalan Muara Baru is amongst the lowest parts of Jakarta. Streets are frequently flooded and turn into rivers. 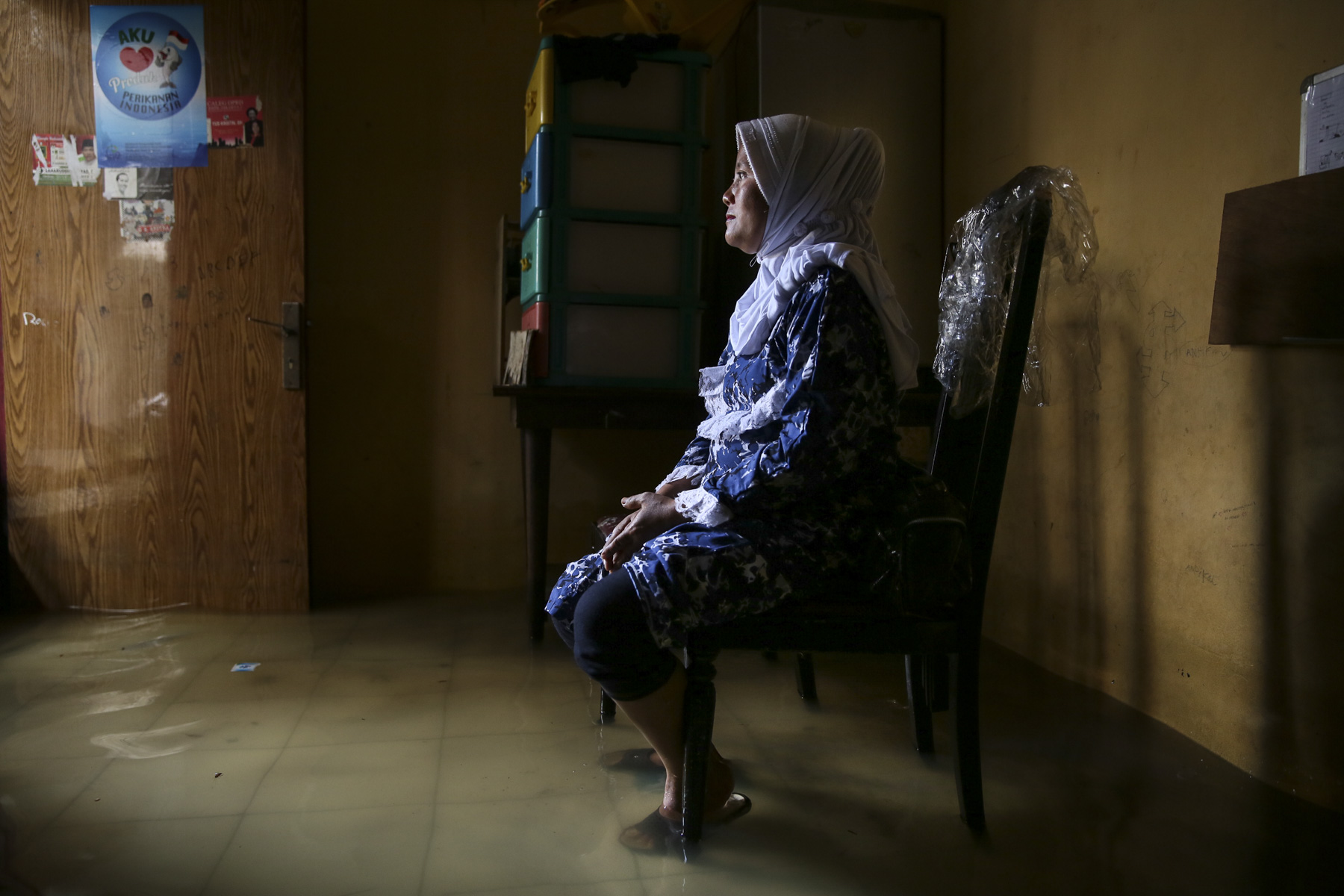 Sarmini did not think the water would come this high, but it did. Luckily she had time to move her stuff to the first floor.

The complete story
Jakarta, with around 20 million residents, making it one of the world’s five most densely populated cities, is on the verge of drowning. It is expected one third of the city will be submerged in water in 20-30 years’ time. In some areas the city is sinking at an alarming rate of 10-20 cm a year caused by subsidence. Population growth and deep groundwater extraction are a big part of the problem. In the face of heavy rainfall disastrous floods are an impending situation for Jakarta. But also high river water levels because of water running down from the mountains and flooding due to obstruction and pollution of waterways. The rise of the sea level and a change of climate pose threats as well. Twenty percent of the residents of this megacity are poor and have no access to running water or sanitation.
Since 2012 a Dutch team of water experts, engineers and Dutch and Indonesian government officials have been working on a strategic Master plan. This plan has provided Indonesia with a coastal development and flood defence strategy resulting in a large-scale flood mitigation and land reclamation project. Ultimately this should lead to the construction of a 36 kilometre long dike ‘The Giant Seawall’ in the Bay of Jakarta. The outcome if and how it will be executed is still uncertain. It is now up to the government of Indonesia to take concrete measures to protect the city against the impending floods. No action has been taken and time is running out.

The project focuses on the lives of 4 persons living in North Jakarta ‘Behind the Seawall’. It shows how their lives are affected by floods, heavy rainfall, water pollution, the lack of clean water and proper sanitation in a sinking city. The four of them represent different aspects of living with the constant thread of water. Alda, a schoolgirl represents the future, uncertain because of problems, though, hopeful for the future; for Sarmini, the street vendor, floods have direct economic consequences: prices of raw materials go up and customers stay away; Lukman, the fisherman, literally sees his house sinking and not sure if he can stay in his house because of planned contructions; Sumari, the tourist guide, personifies the relationship between past and present. They live in the slums of North Jakarta, where the threat of flooding is most severe.

My personal story
Half of the Netherlands lies below sea level. Living in a dike house myself, when I look outside my window I see the water at eyelevel. In October 2013 I heard a newsitem about Jakarta is sinking, I was intrigued; what’ s like to live in a city on the verge of drowning? I was thrilled; my project proposal won the IDR grant of the European Journalism Centre. Finally I had the money to fund a researchtrip to Jakarta. Writing a proposal from the safety of my home is one thing; what if my ‘main characters’ did not excist or I could not find them? I set off to Jakarta for research and to find the four people I wanted follow during the flood season. Arriving for the first time in North Jakarta and seeing the state of the seawall I was in complete shock; if this wall breaks now, we all will wash away, the sea is never empty. How was it possible nobody seemed to be worried but I. During two weeks, I patrolled through the slums of North Jakarta, talking to people, looking for the right persons to follow. Did I find them? Yes, and they are even more interesting than I ever anticipated. This project has been and still is a great journey. I have had great moments, though, some were not so great at the time;rats running around too close to my head when spending the night with the Lukman family in their house built on stilts above the sea, with. Being so thirsty because I did not wanted to drink anything; too scared to go to the toilet; a whole in the very thin plywood wooden floor that would definitely not have hold my weight. Or wading through waste deep heavily polluted water to visit Ibu Sarmini’ s house. Scrubbing with 1 liter of Dettol to get clean afterwards. But what an adventure it was. Was it a smooth journey? Hell no, cultural differences can be a challenge and organisations and bureaucratie a true nightmare. Financial set backs and many disappointments. A journey with tears and laughter, I have met people I never wish to see again and I have made some great friends.  READ MY STORIES BEHIND THE PICS AT MY Facebook PAGE.