Introduction
South Africa is one of the largest wine-producing countries in the world. Exports have boomed over the last ten years, and have risen from 174 million litres in 2001 to 350 million in 2011. The Cape Winelands – the wine district of the Western Cape province – is one of the wealthiest areas of South Africa. Over the last year there has been violant strikes and protests in South Africa by miners farmworkers, especially on vineyards. Prices of daily life have gone up considerably over the last year; bread, meat and petrol; The population revolts. Meet Johanna, 53 and seasonal farmworker in Stellenbosch area, the ‘wine capital’ of South Africa. An insight in the daily life of Johanna and her
family during the height of the harvest time in Western Cape. READ MORE my personal story at bottom of page. 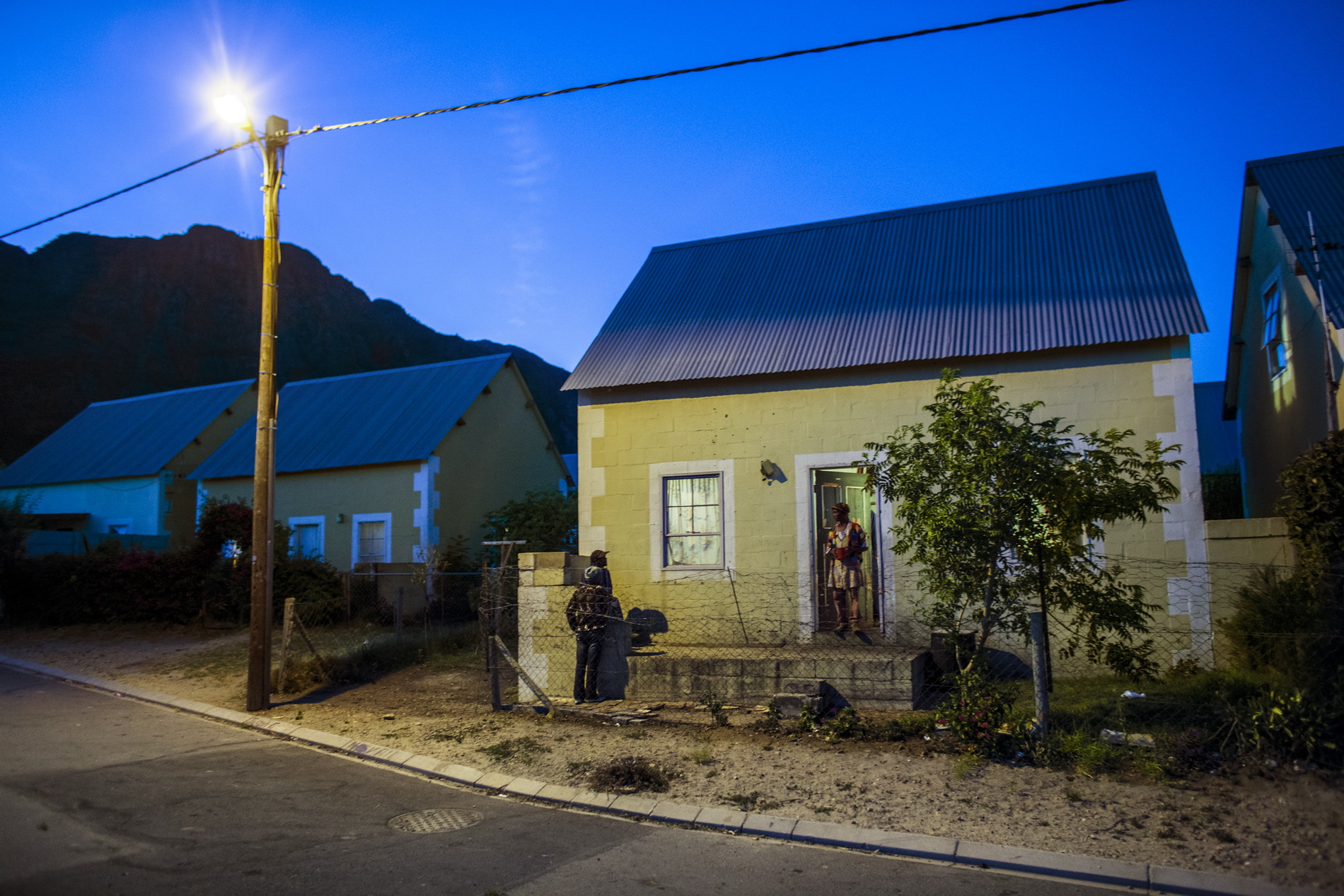 At 7 in the morning Johanna is picked up from her home to go to the vinyards. 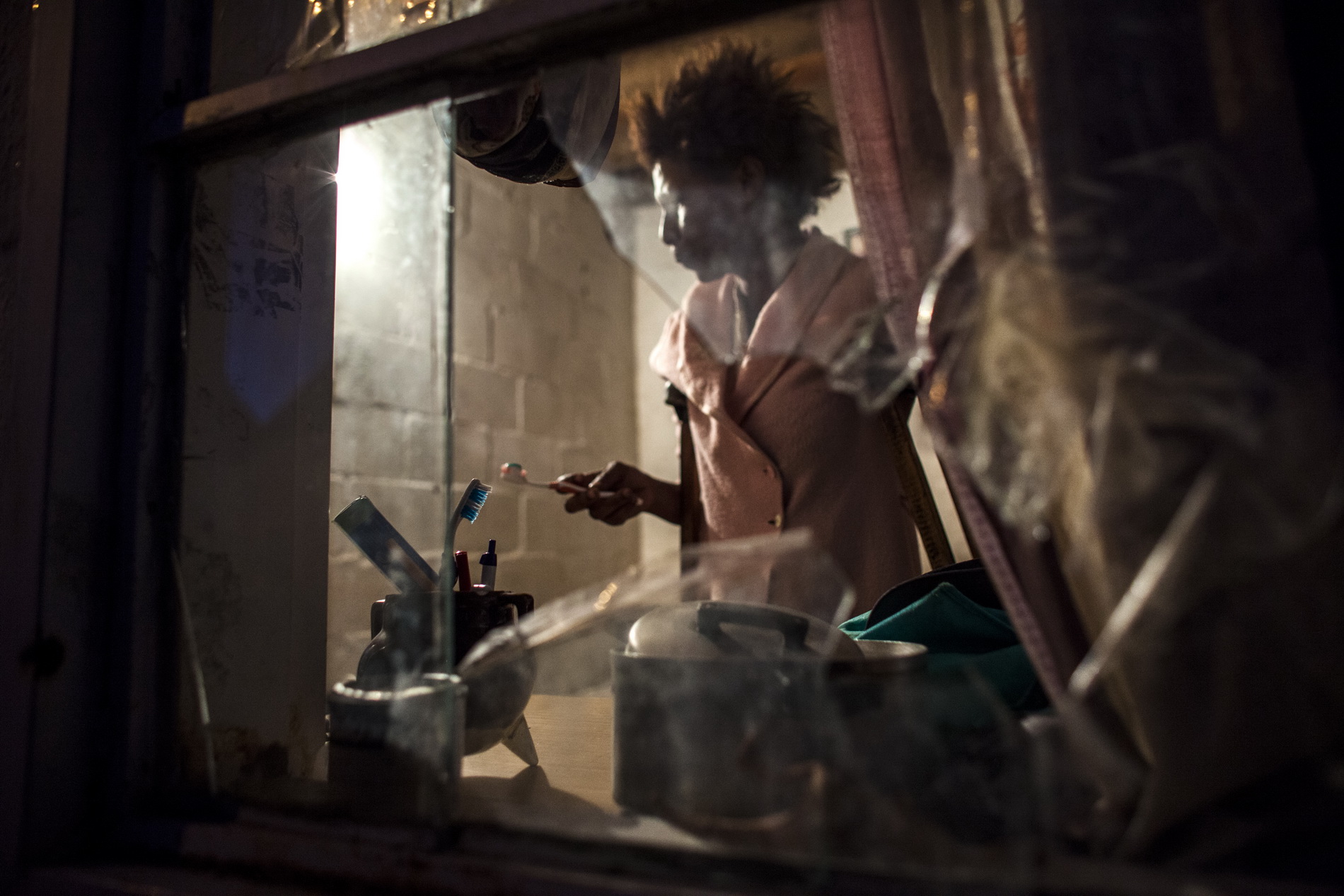 Early morning 5, Johanna and her family wake up. 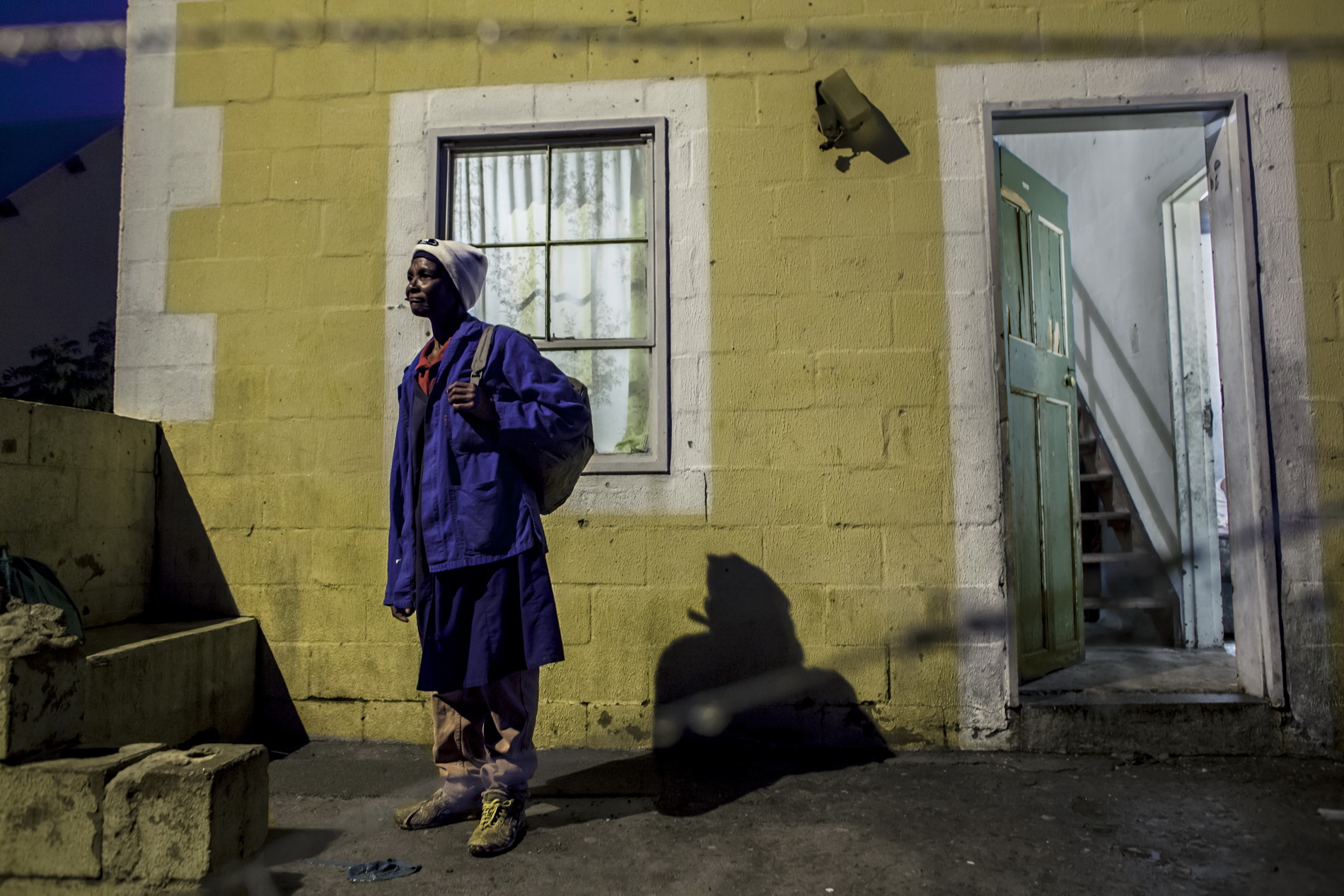 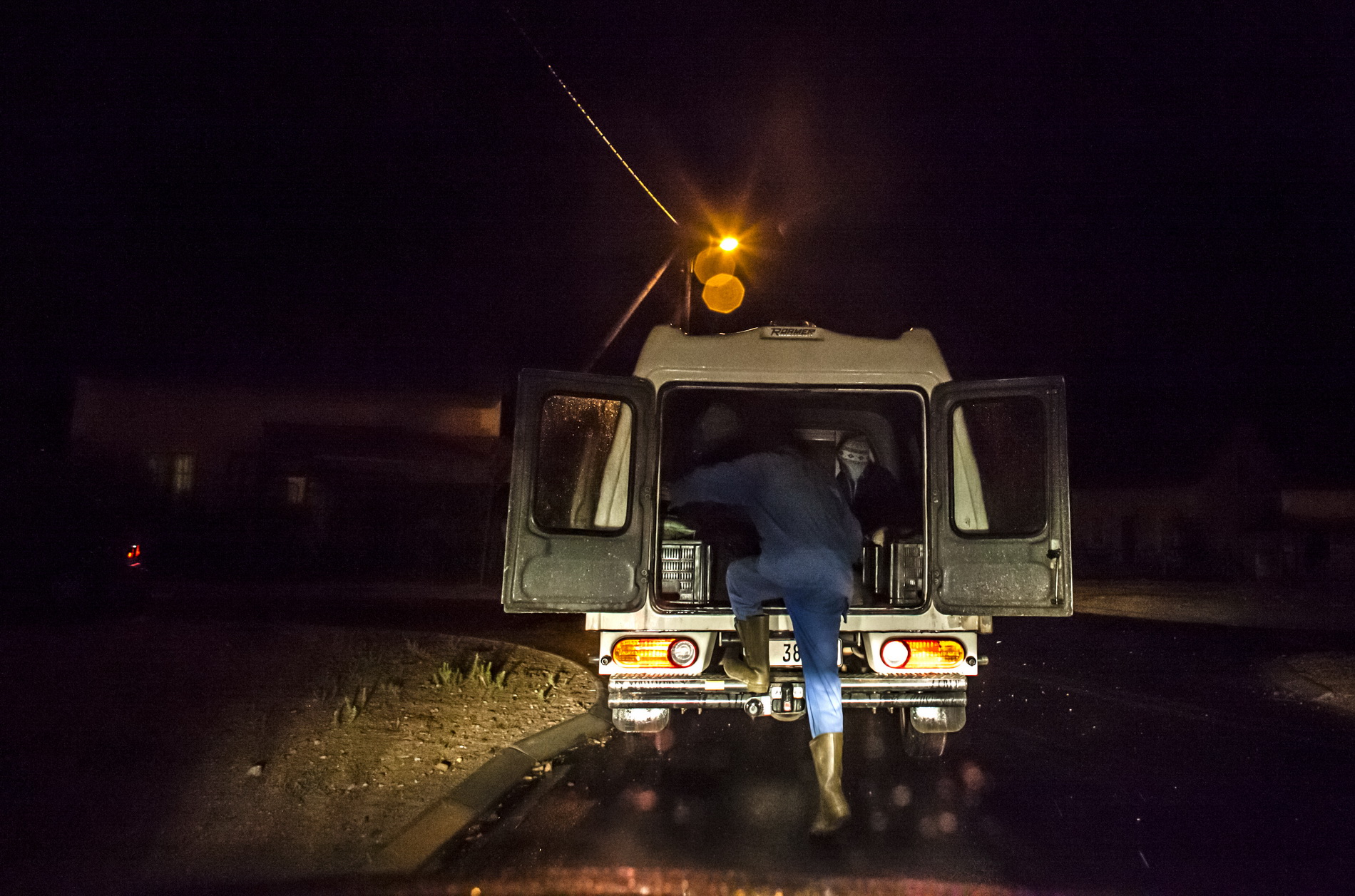 Pick up to go to work. 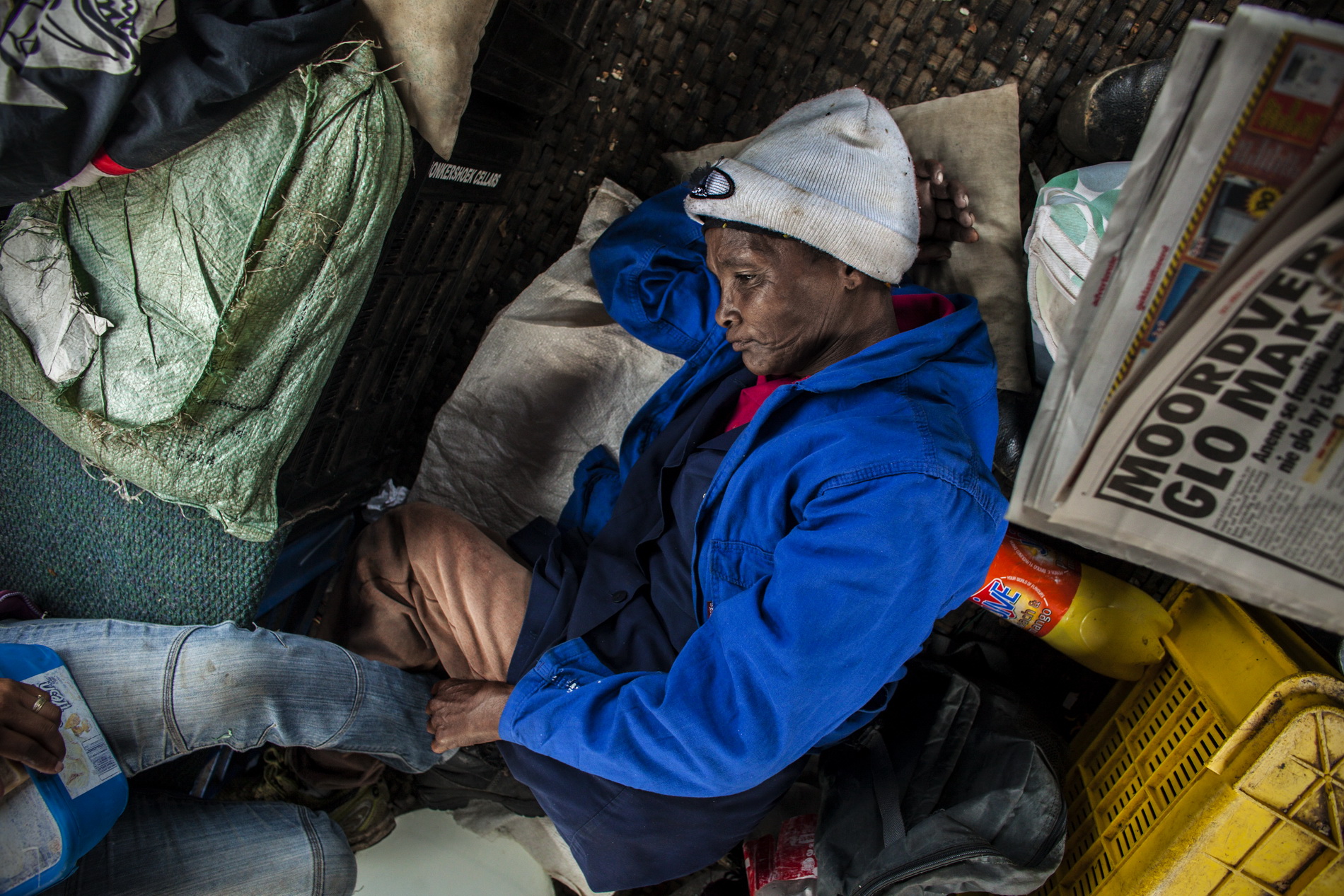 Johanna taking a nap on the floor of the pick up truck. During the height of the harvest, she works 10 hours a day. 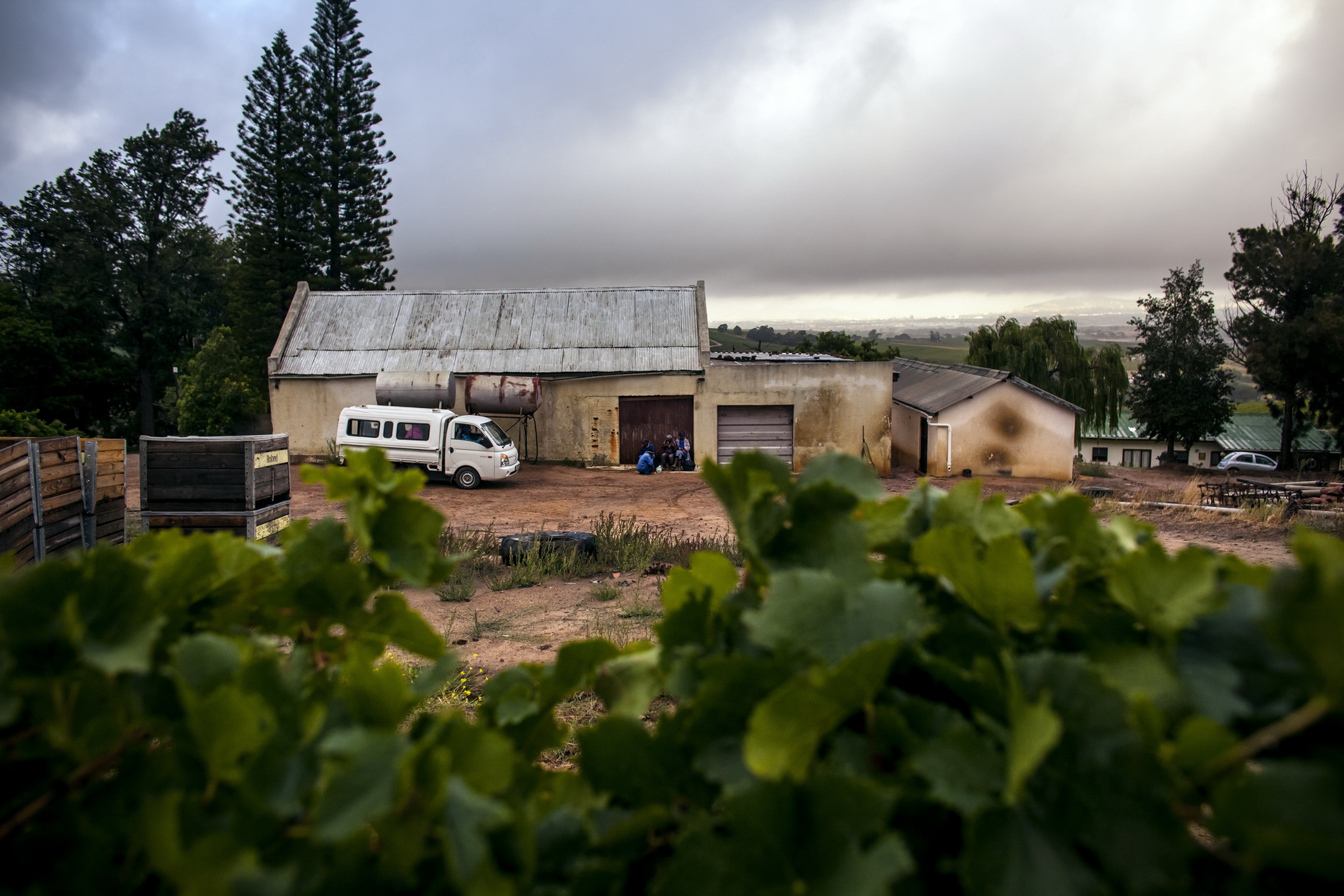 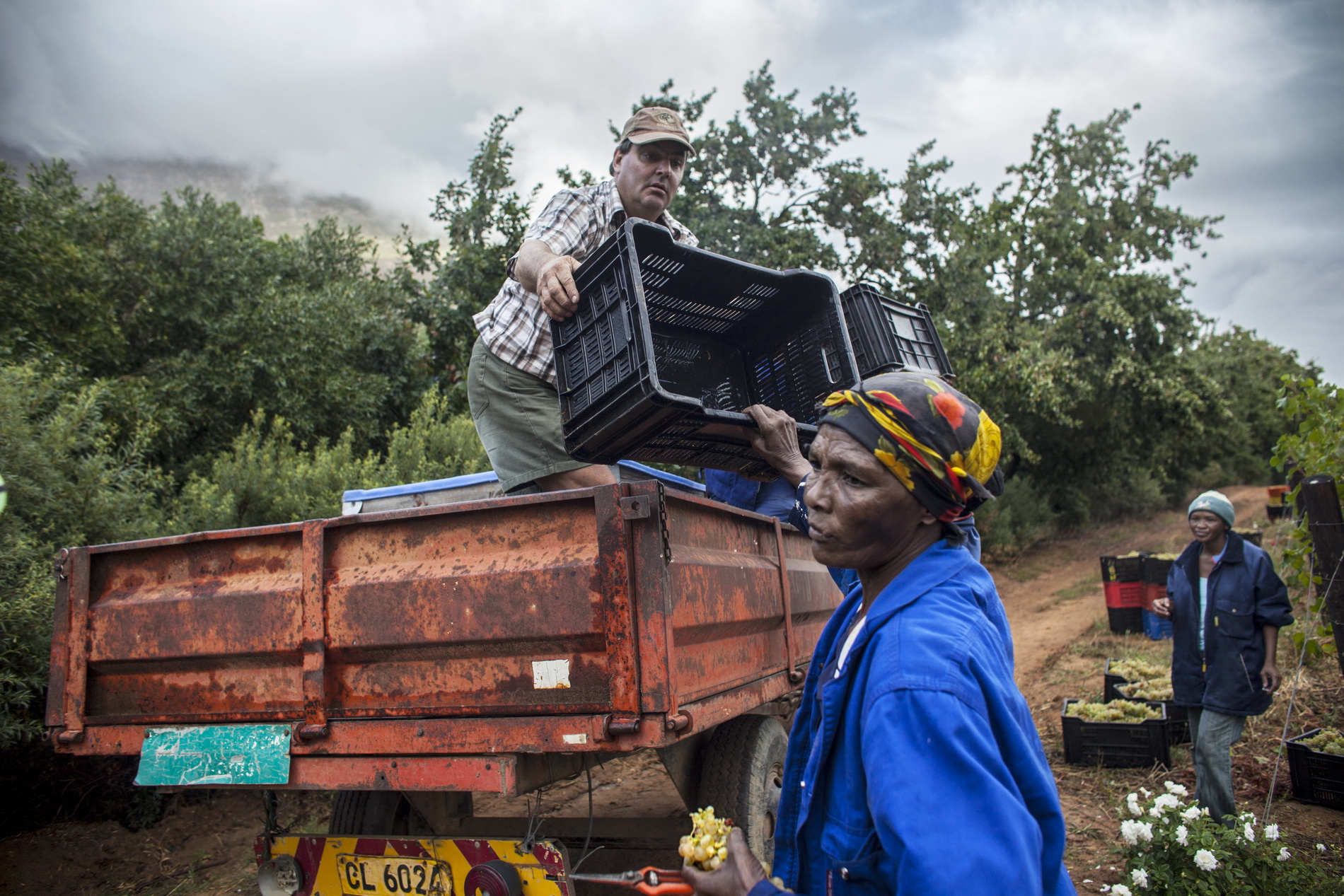 The ‘Voorman’ contractor. Empty buckets for the grapes are handed out. 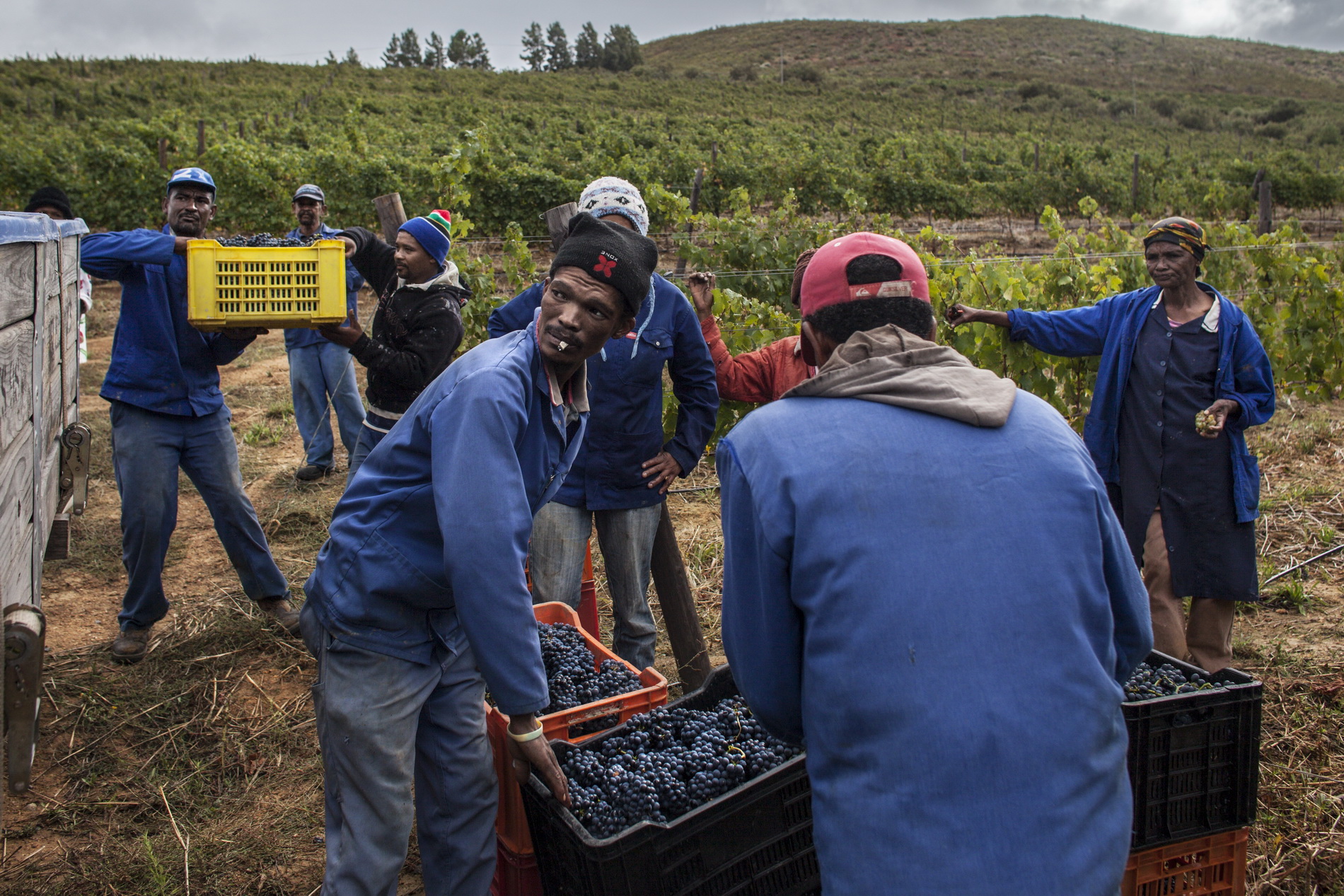 The grapes are uploaded to the truck. 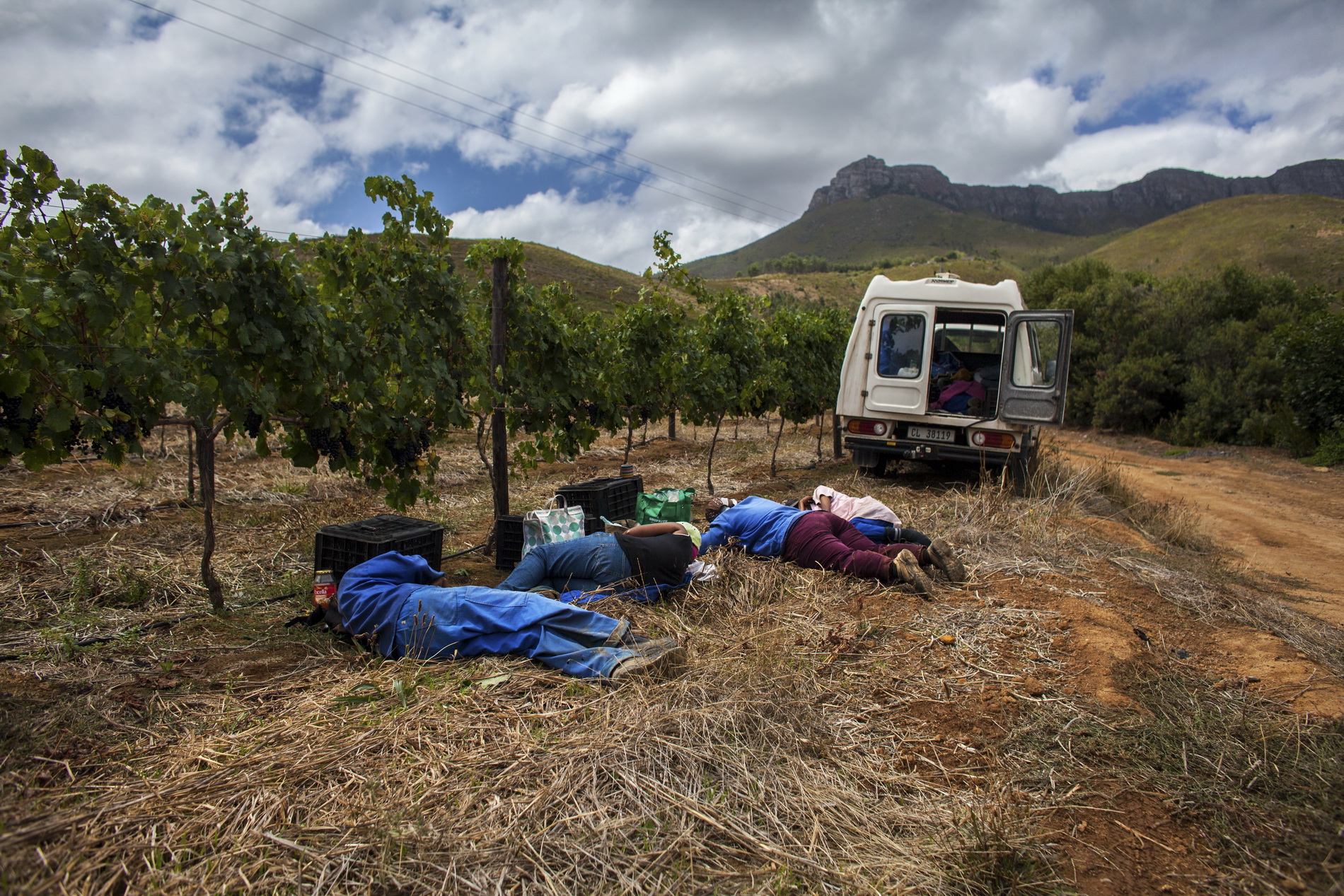 During an hours lunch break, workers are having a nap. 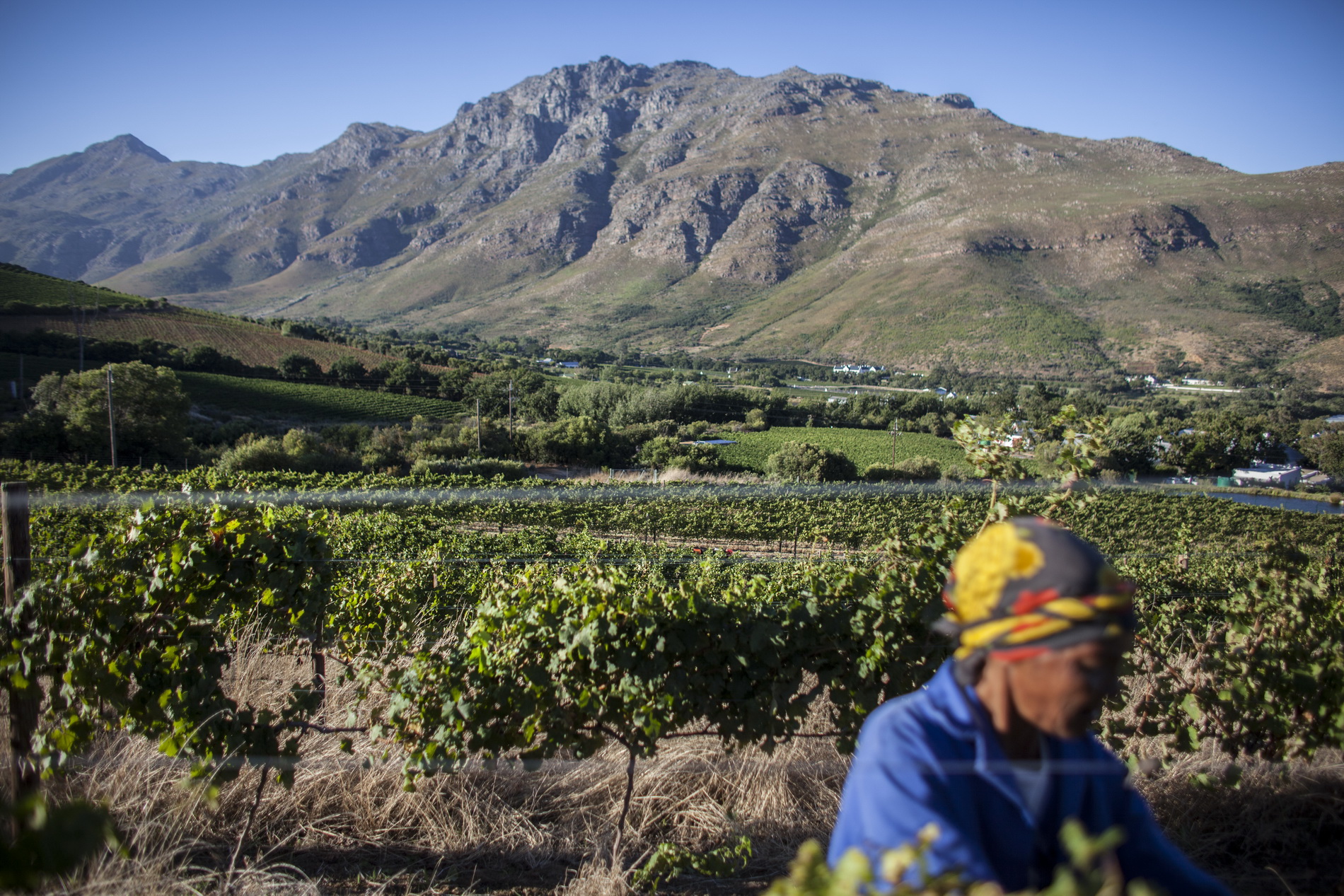 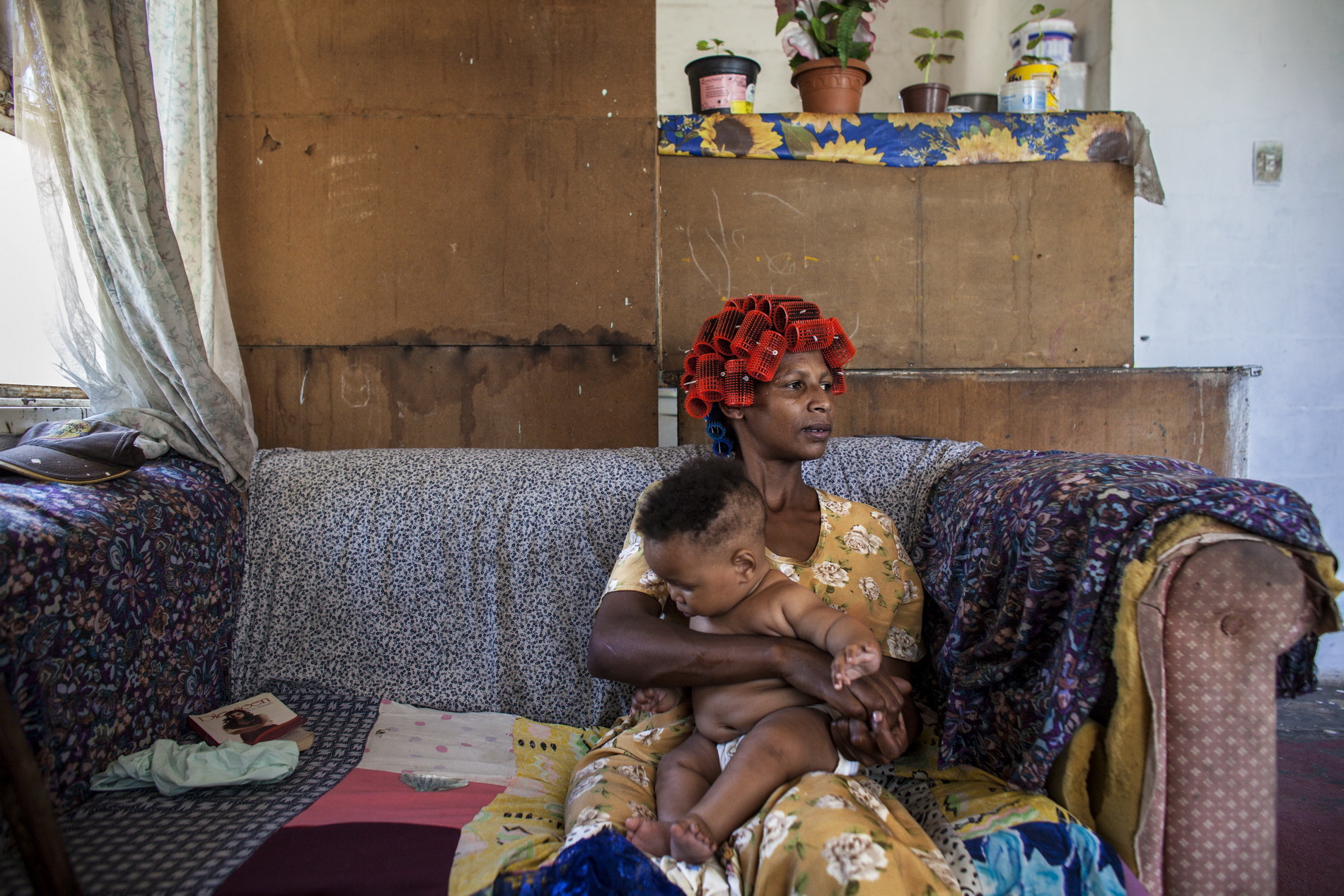 Johanna’ s eldest daughter is disabled and stays home to look after the childeren. 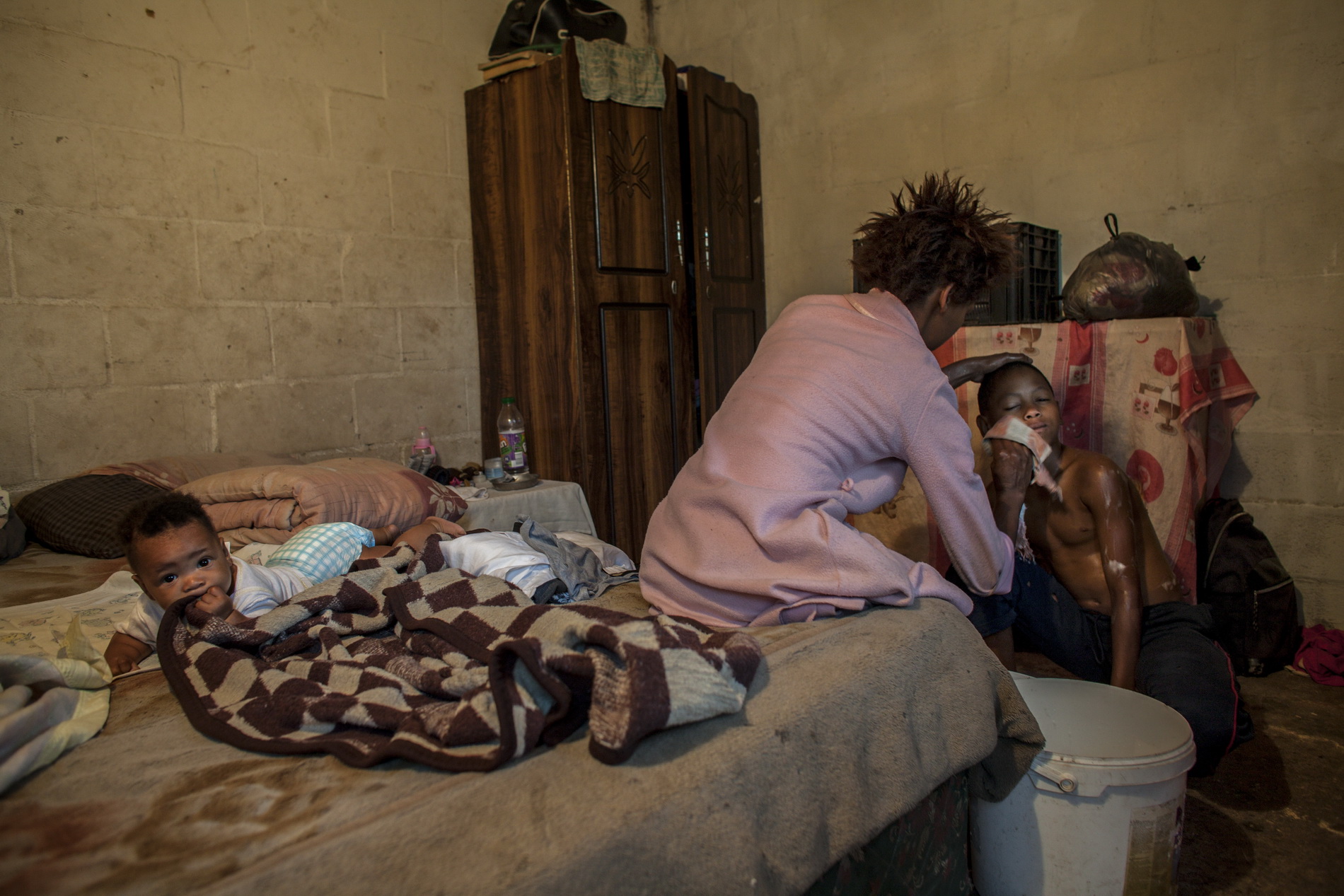 Johanna s daughter lives with her 2 children and husband in 1 bedroom. 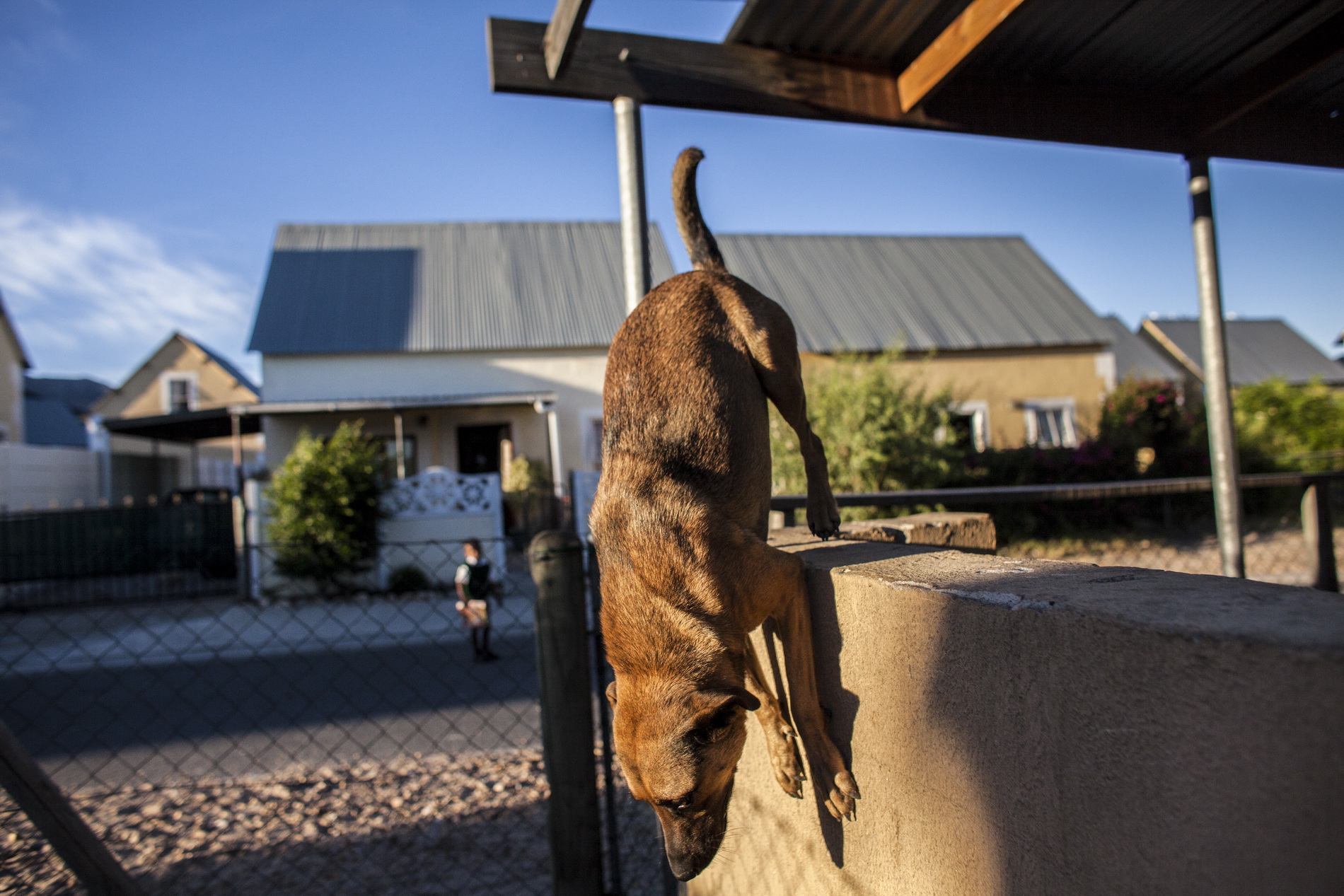 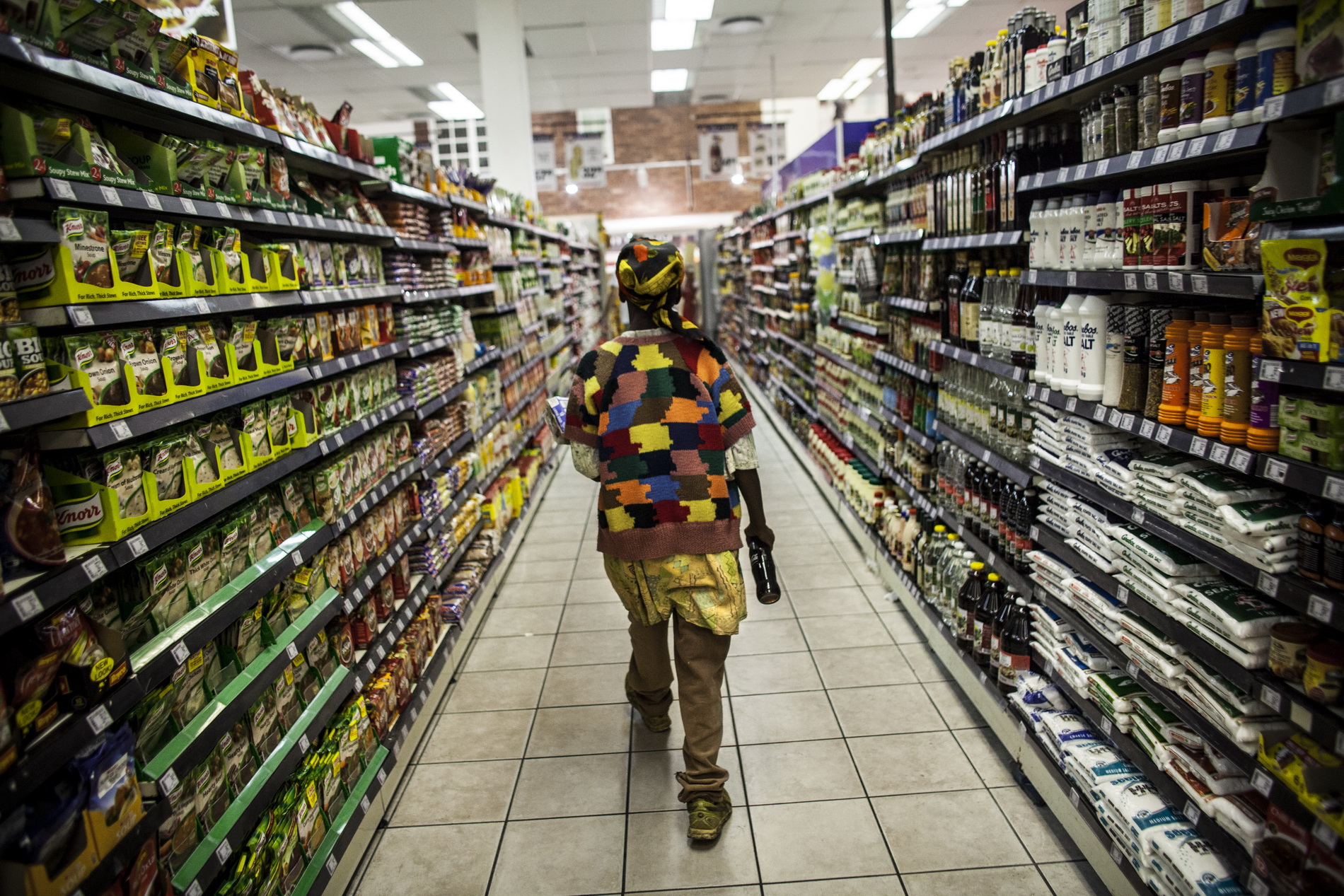 At Friday afternoon, Johanna goes to Spar to use the ATM machine to get her salary. 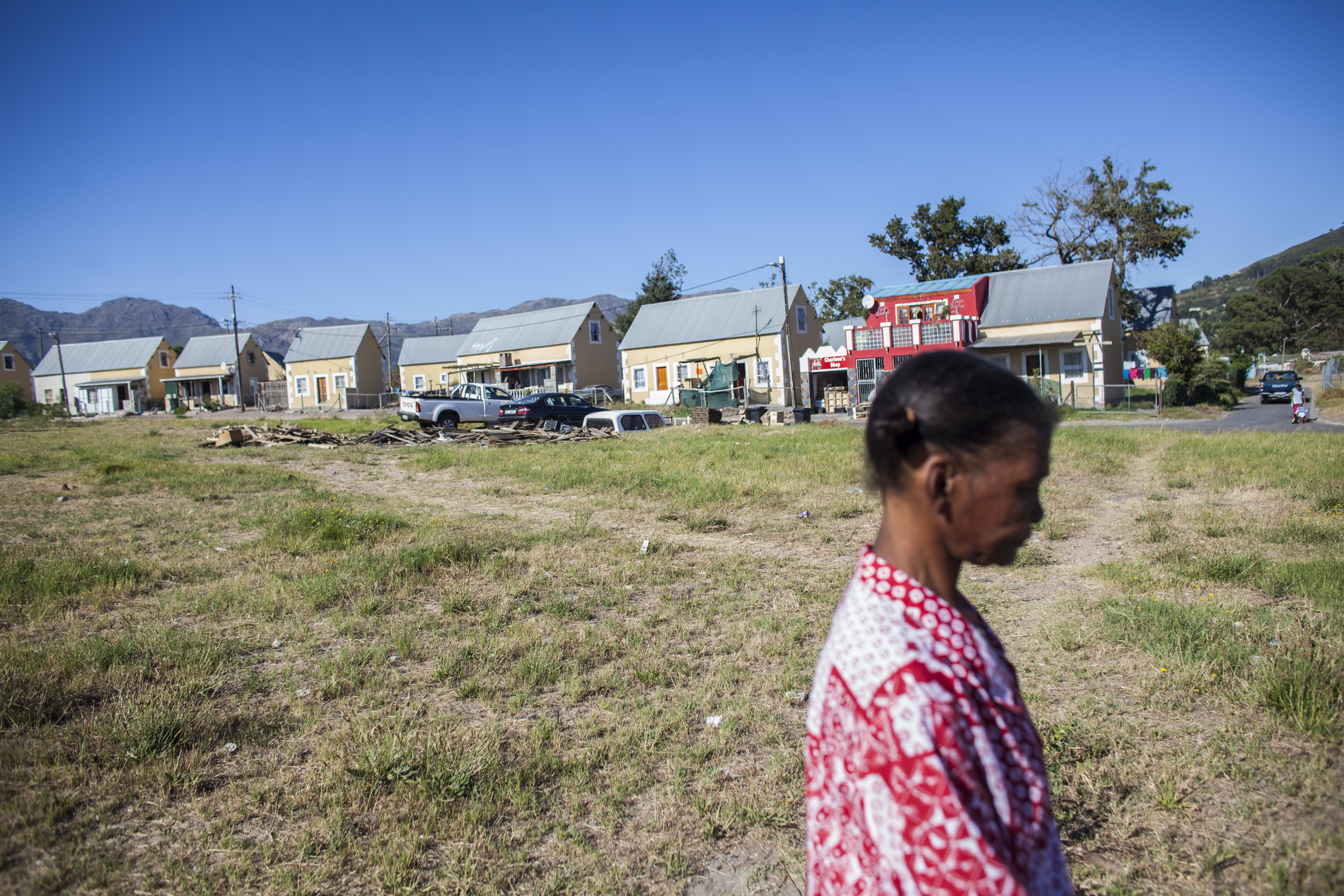 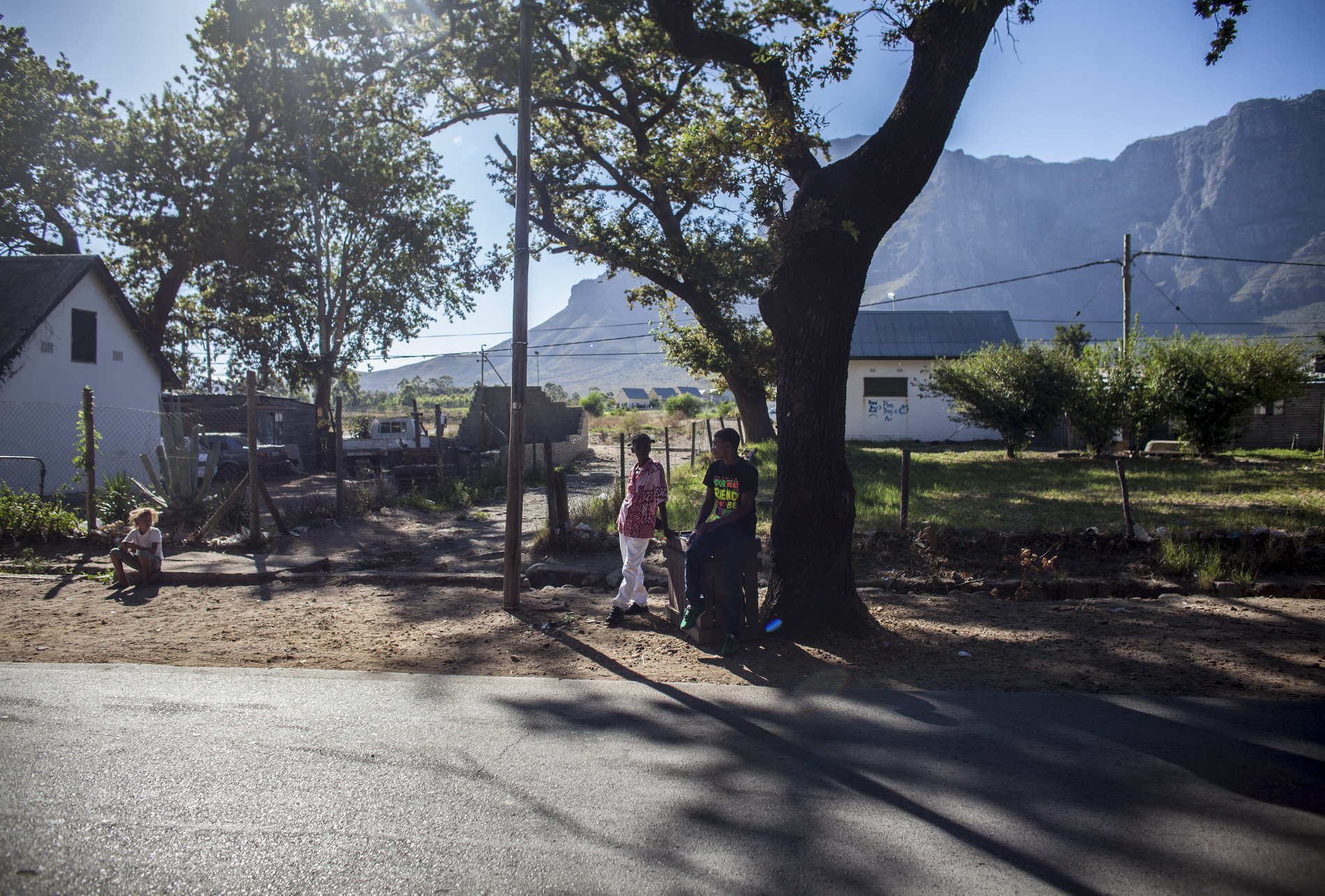 Every three weeks Johanna goes to Paarl for her groceries. 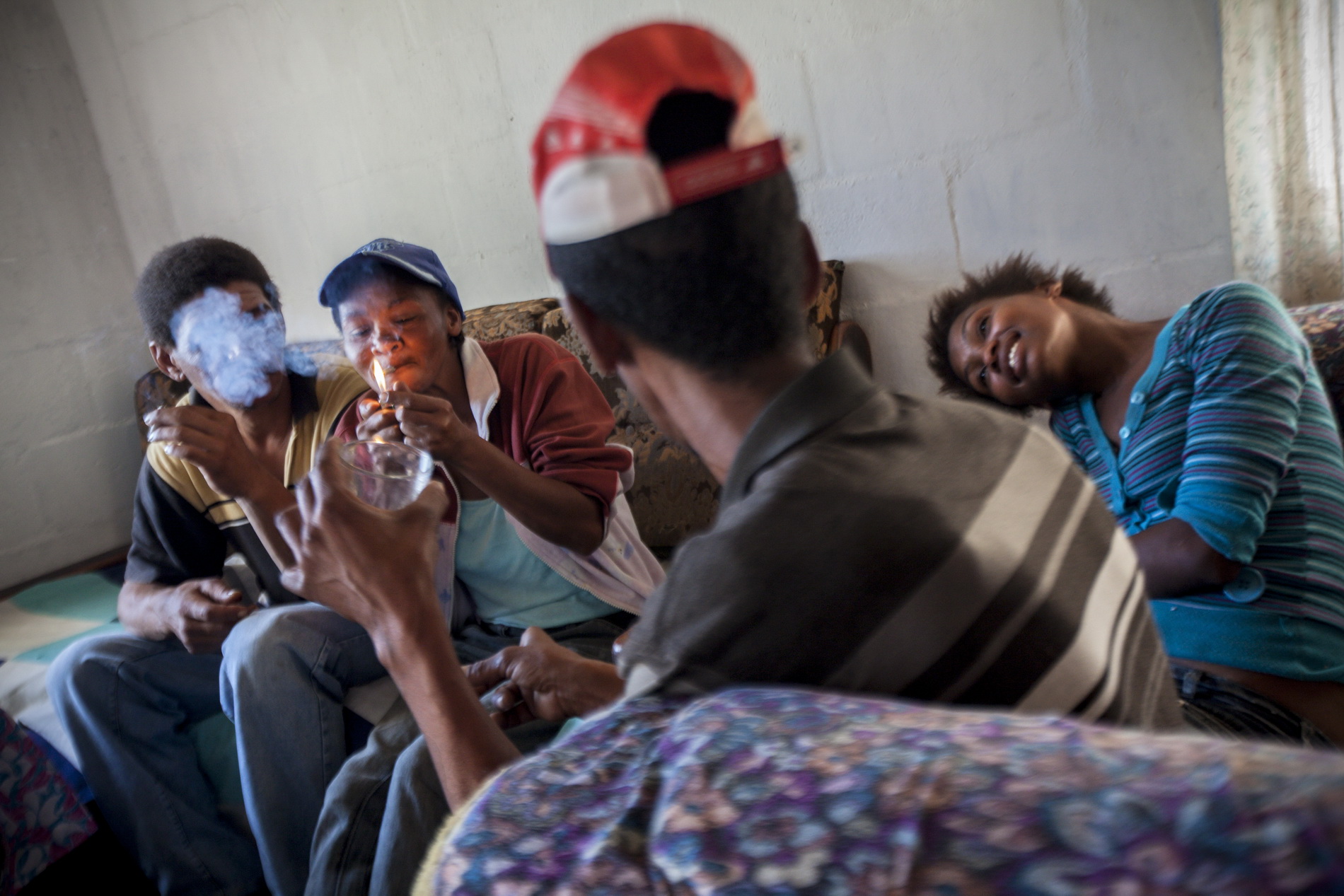 Alcohol and drugs are a big issue amongst seasonal workers. 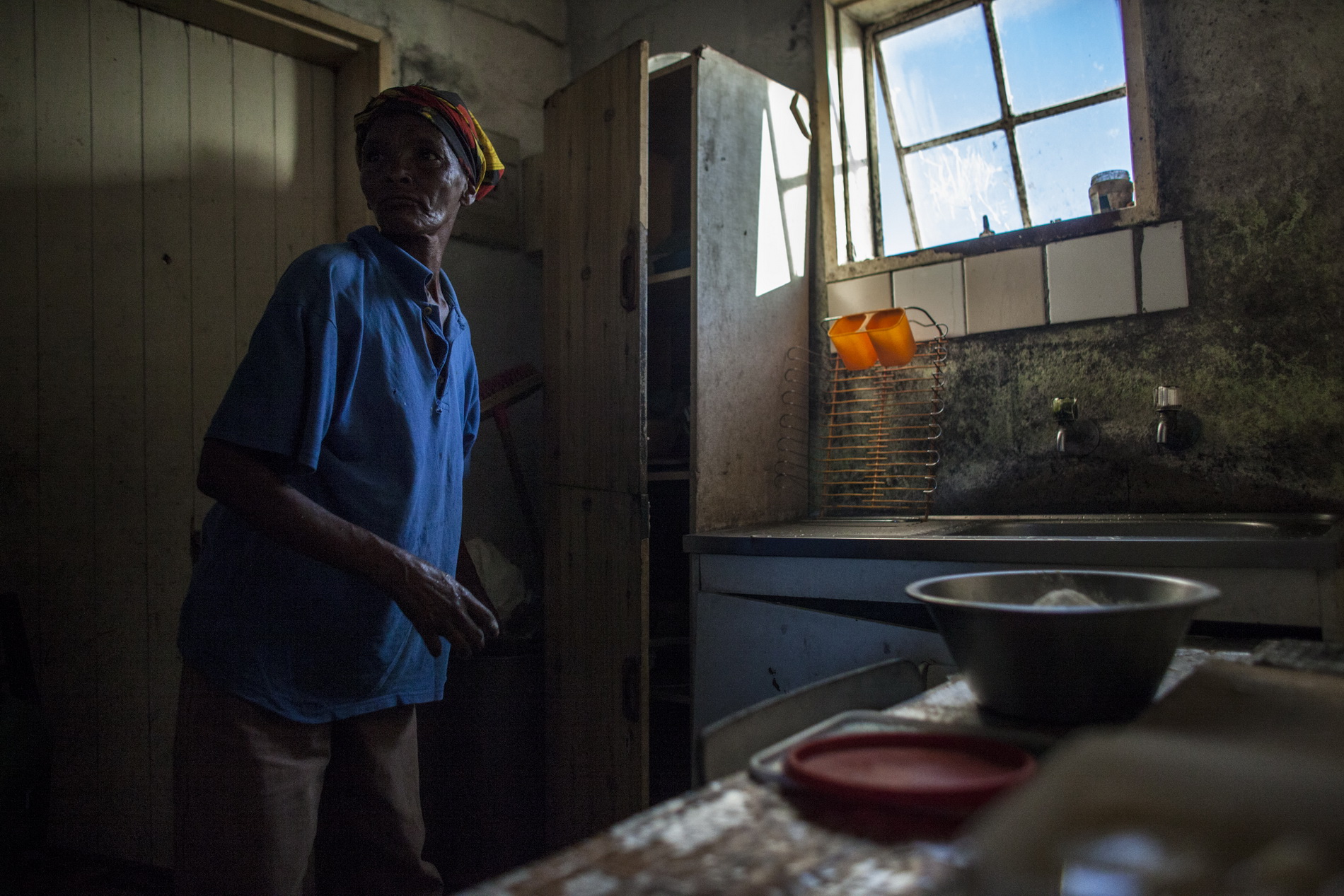 Everyday Johanna bakes her own bread. 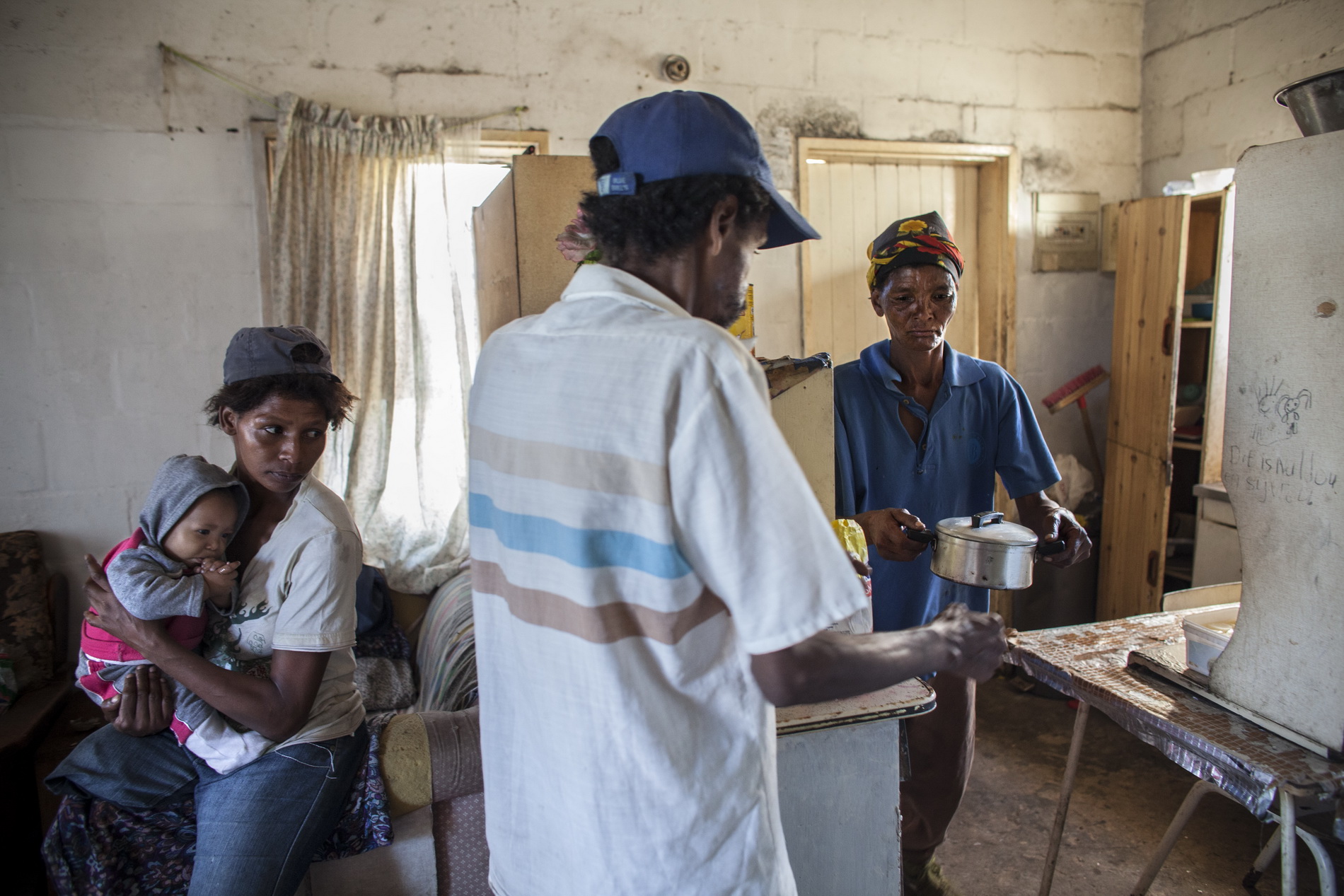 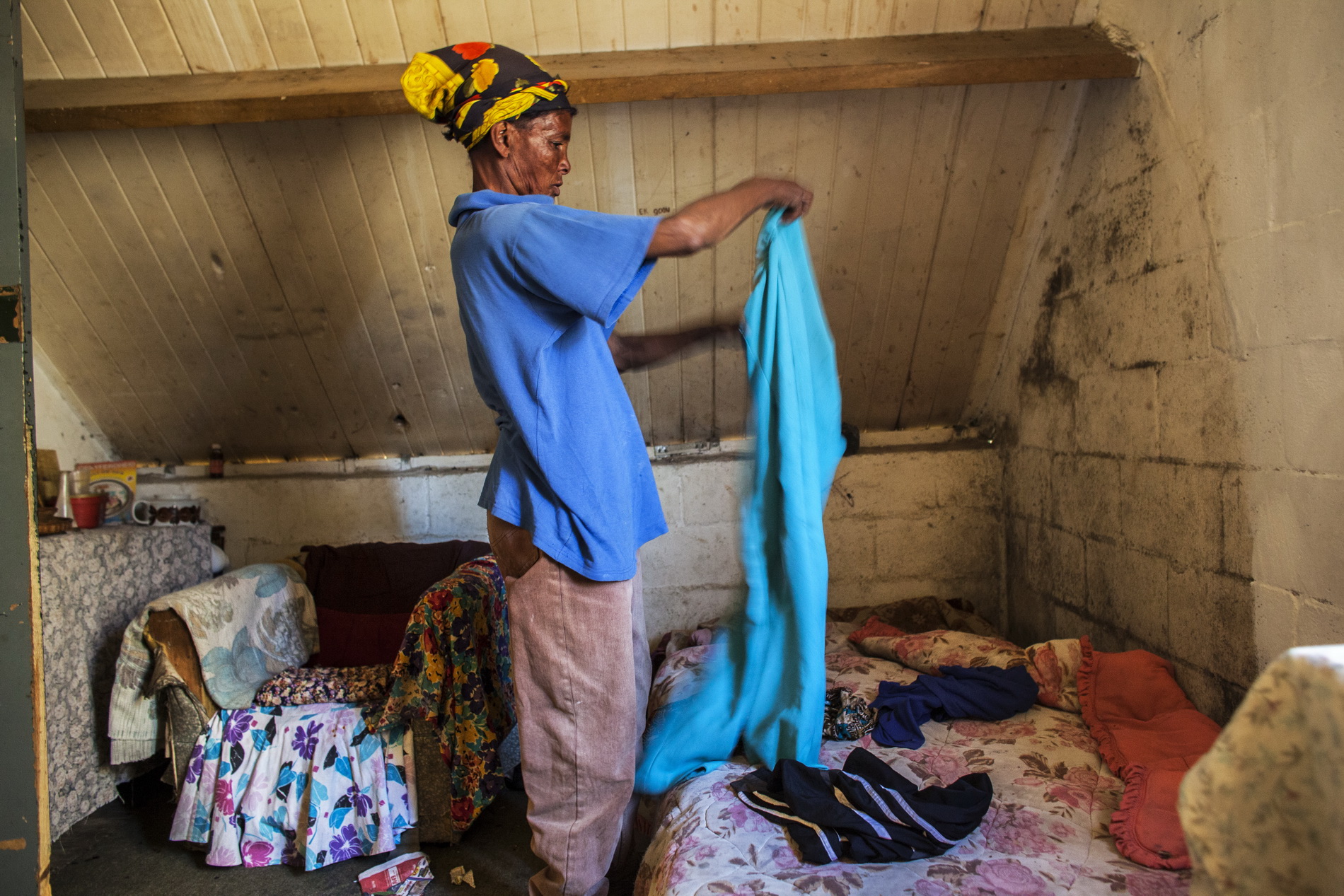 Johanna doing the laundry in her bedroom. 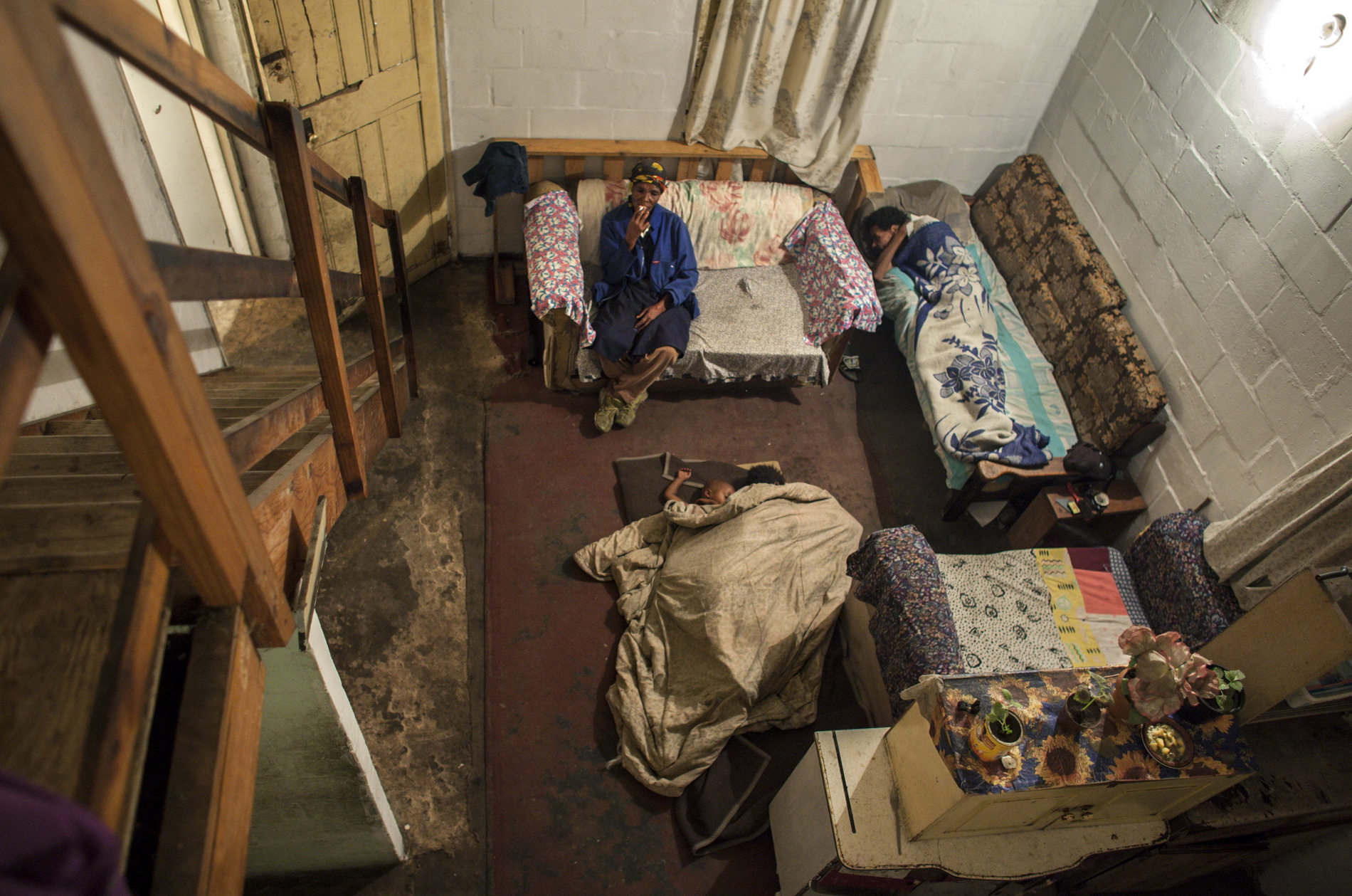 During harvest time, she starts working while most of her family is still asleep. 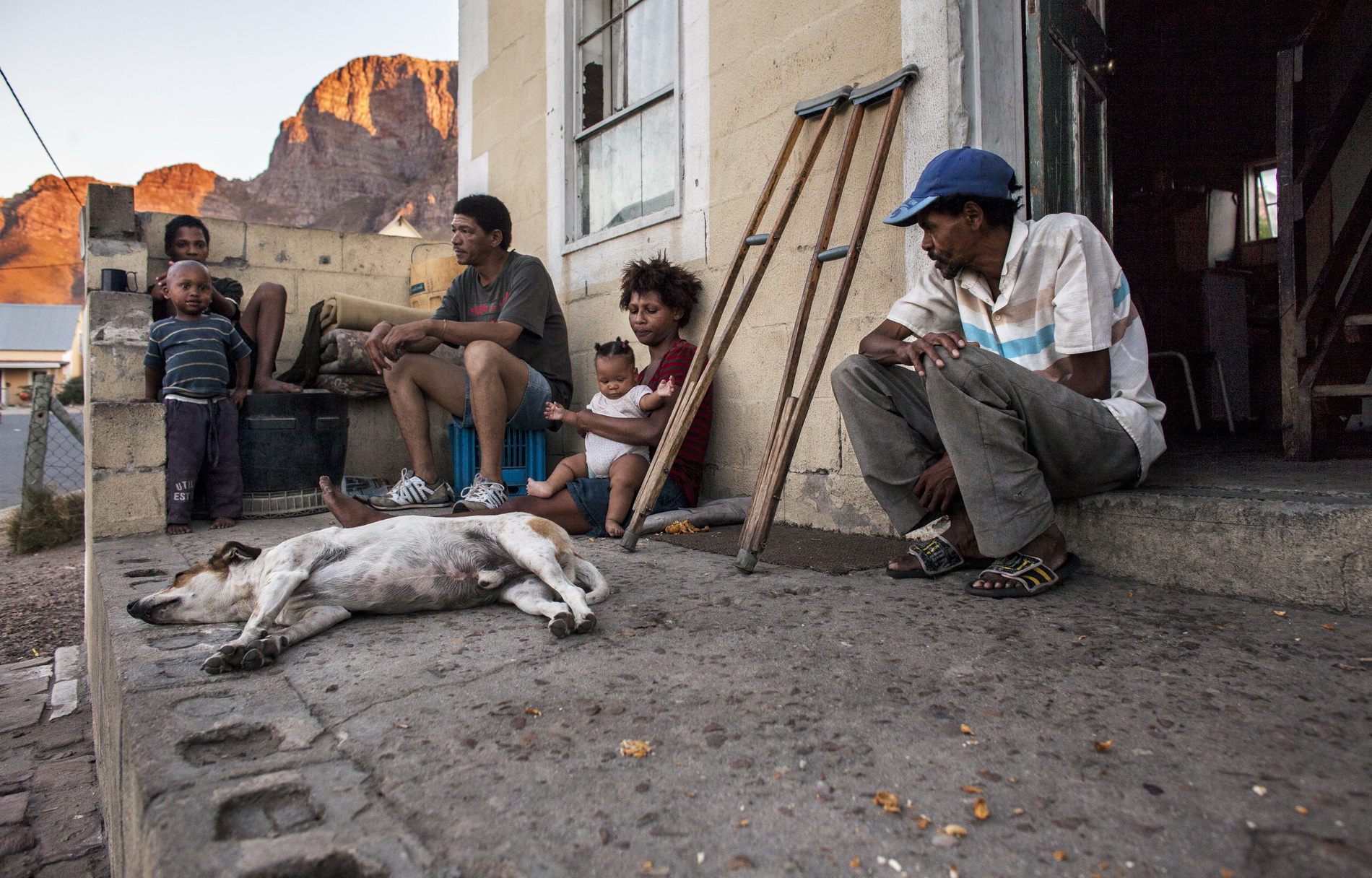 Family meeting at the end of the day, on the porch it is cool. 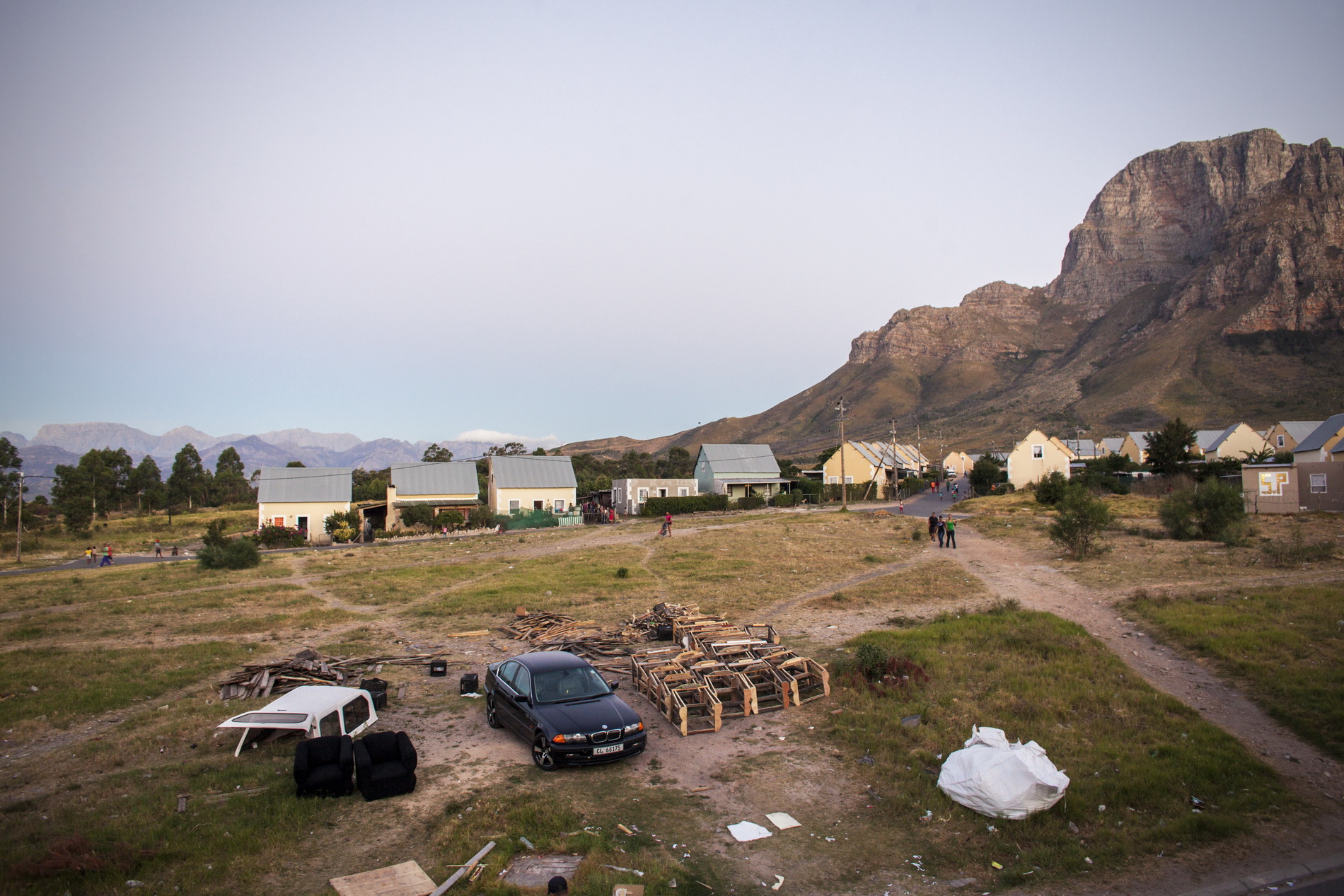 Overview of the village. 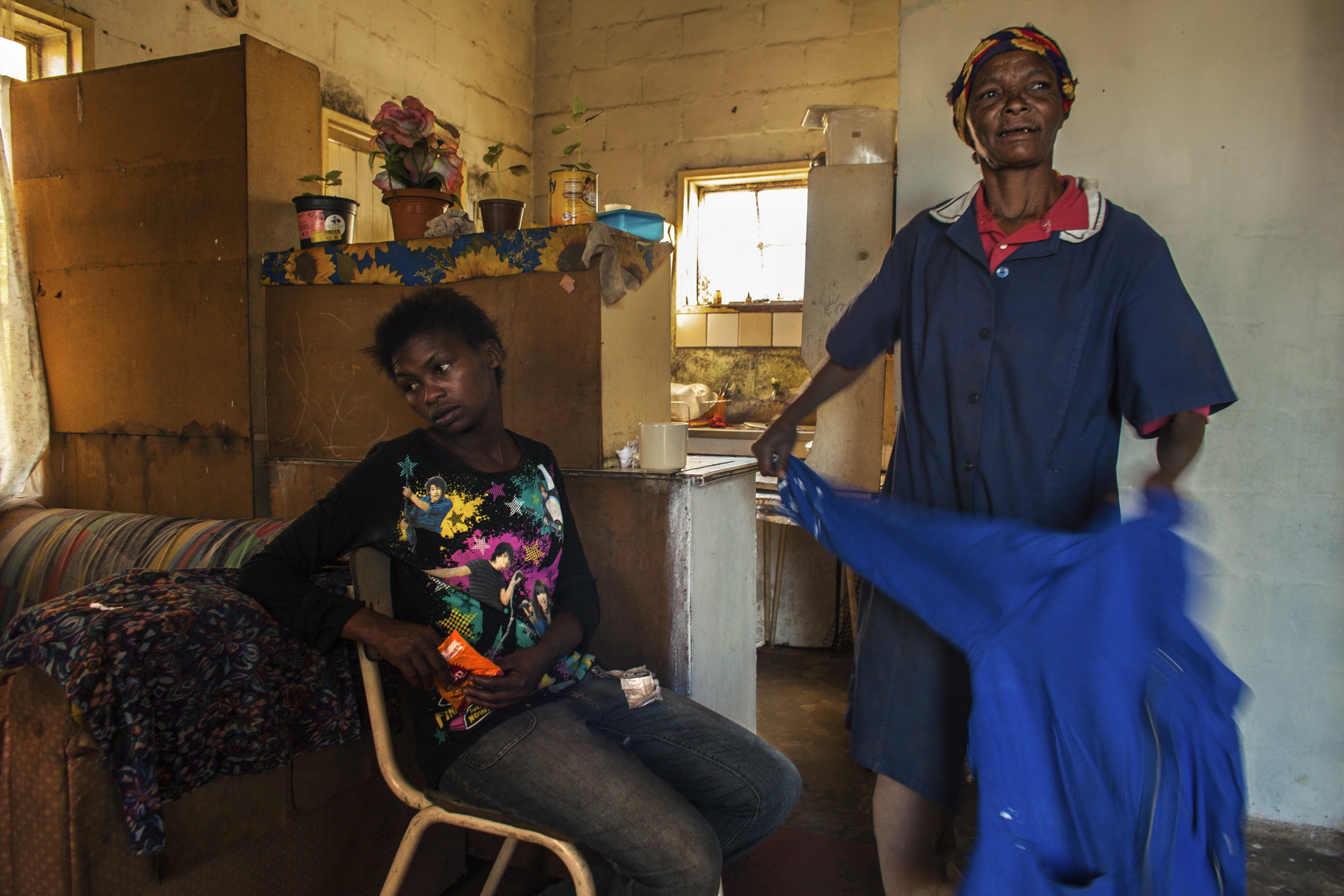 Johanna s jongest daughter is too lazy to work, she lives of the salary of her mom. 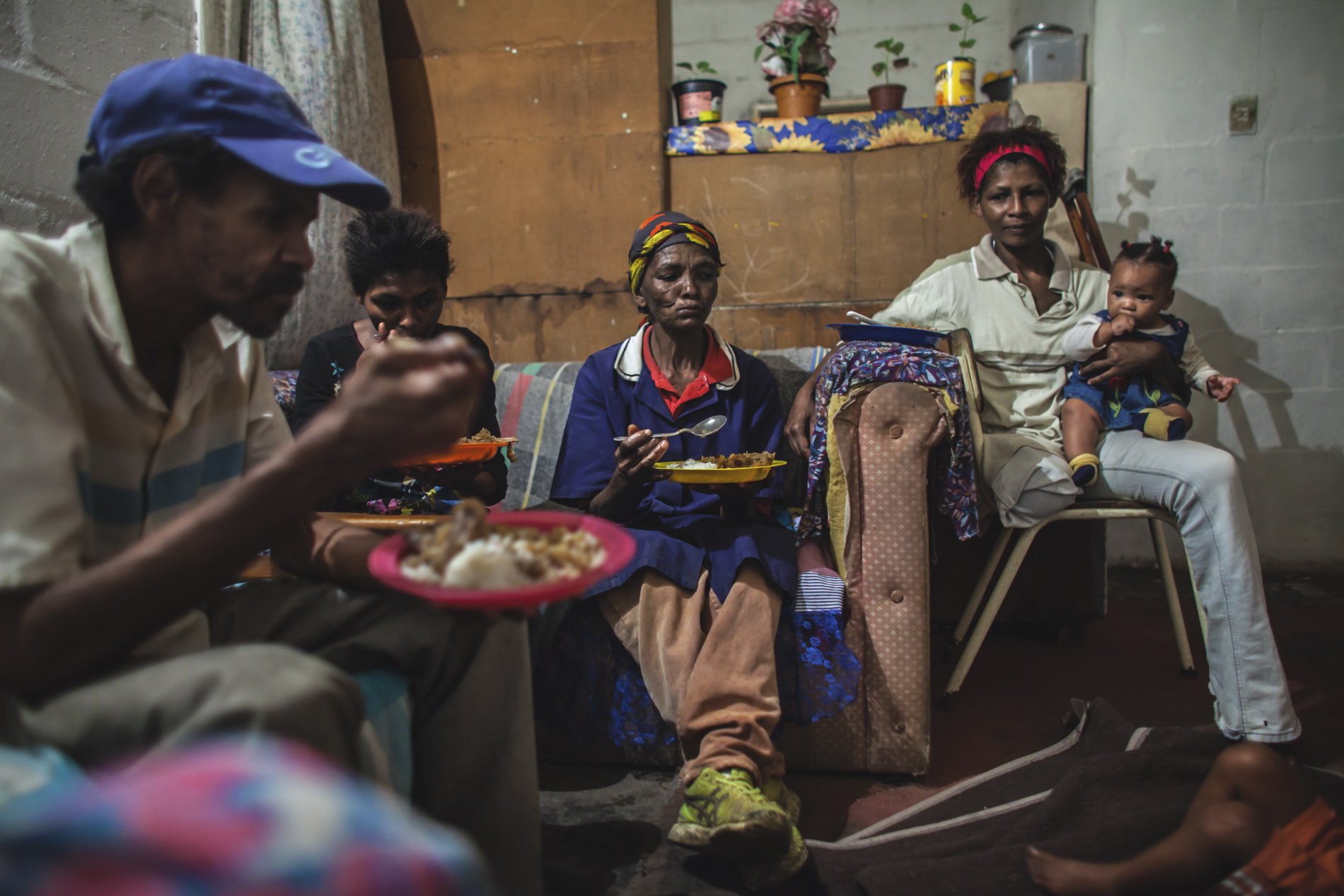 Sometimes they get meat and rice from a neighbour. 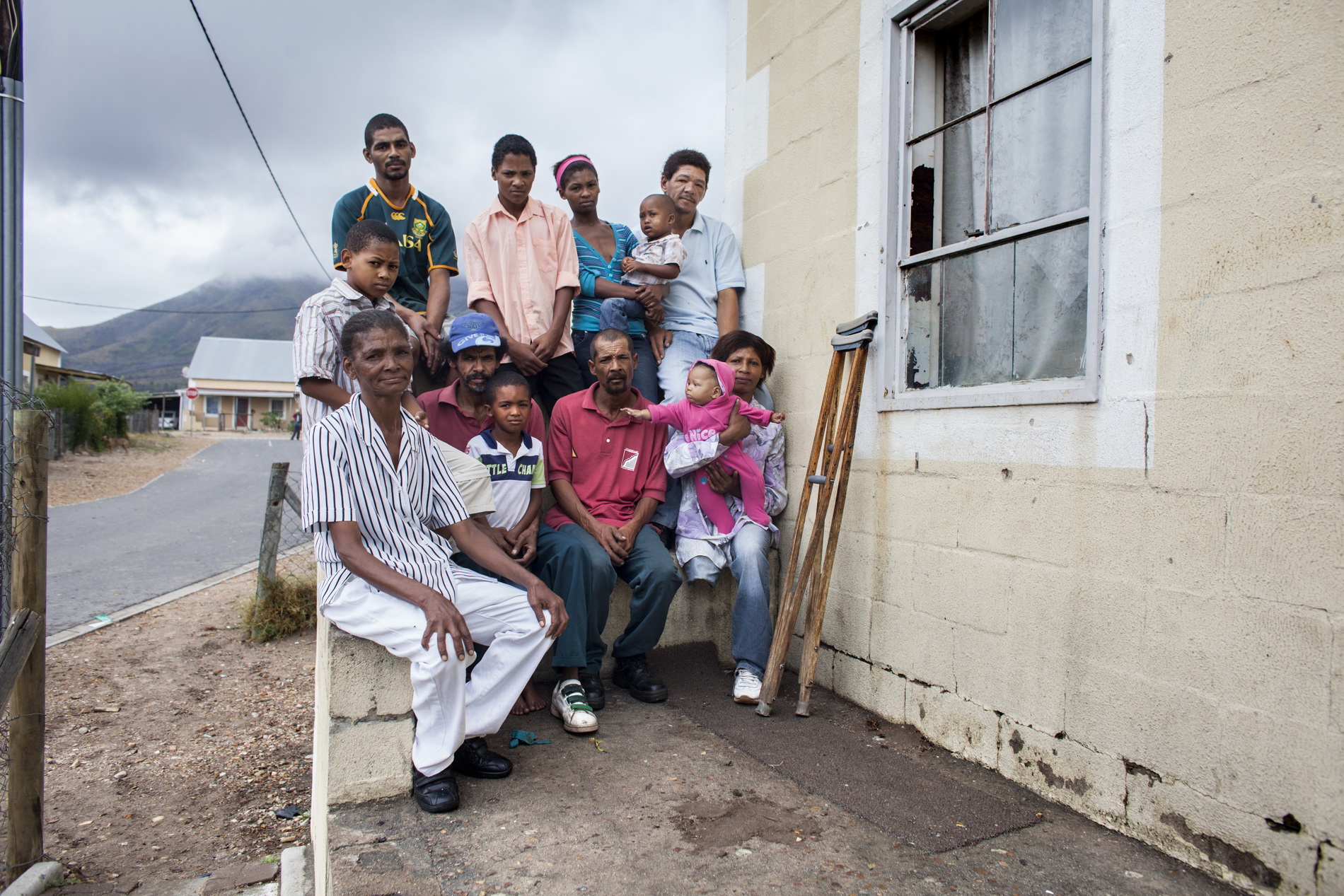 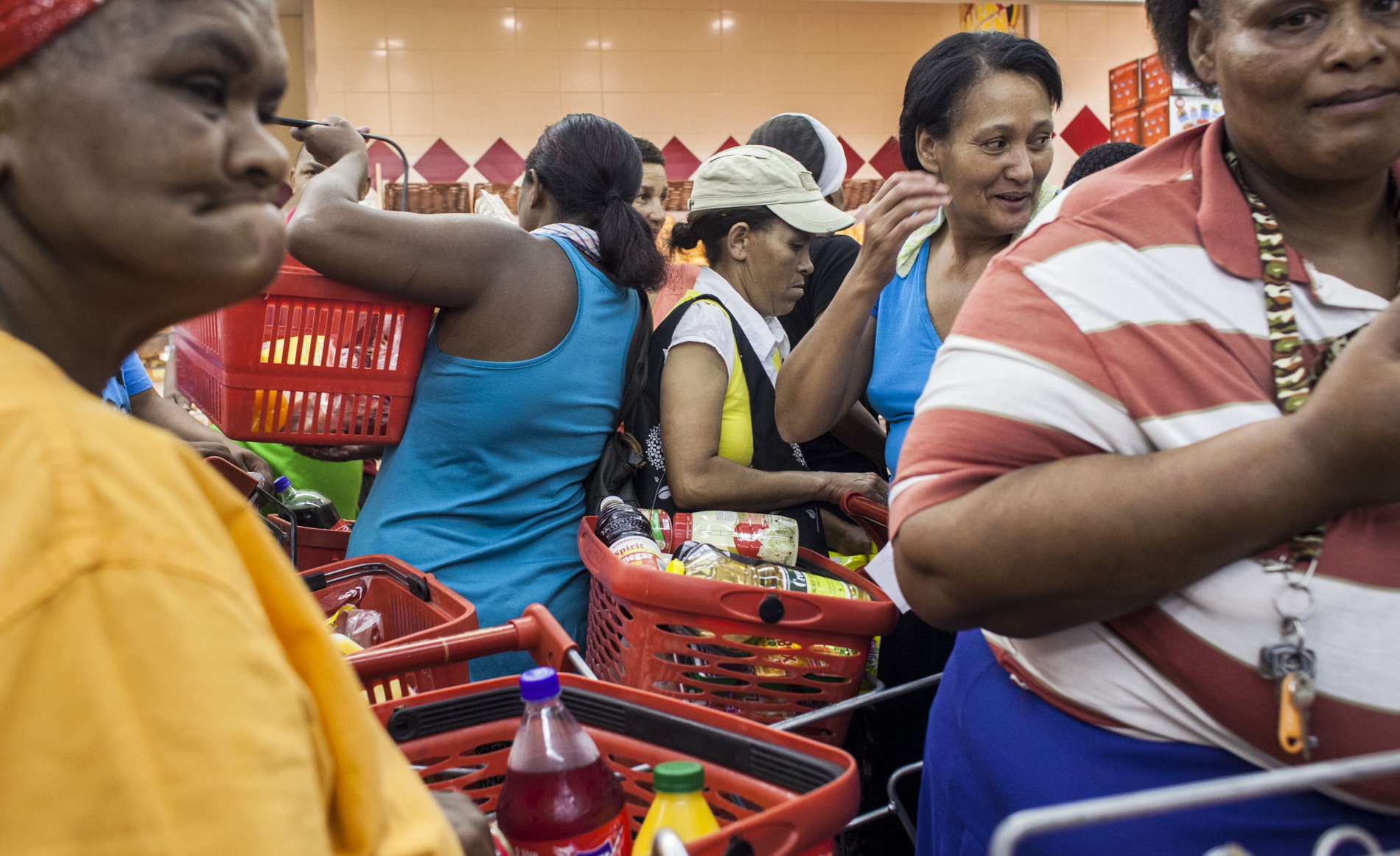 The supermarket in Paarl is mostly visited by farmworkers and very busy because of its cheap prices. 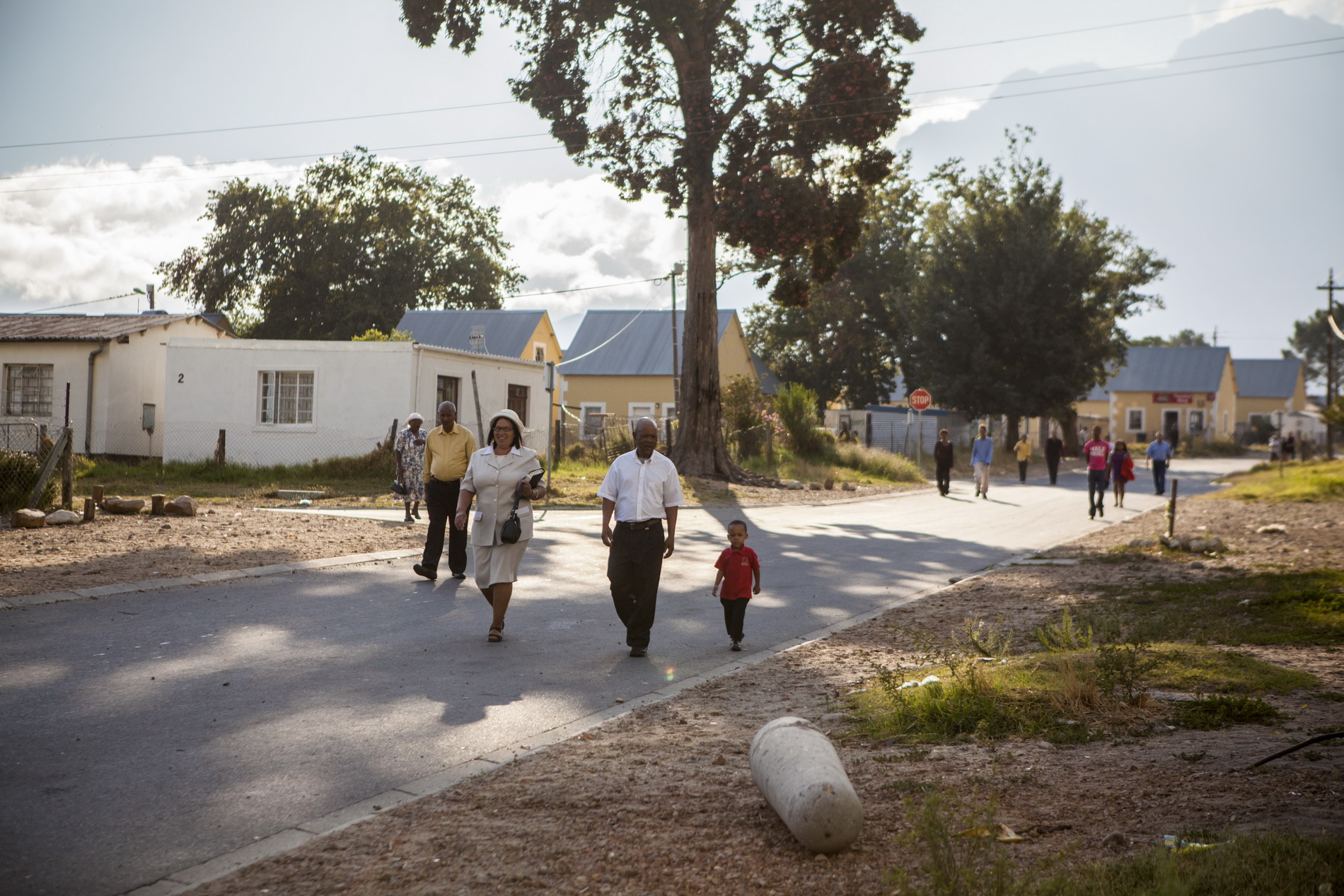 Sunday morning, the community is getting ready to go to church.

My personal story ‘Sour Grapes’
Sure, like everybody else I like a bargain too. For those who enjoy drinking a glass of wine, how good is it to find a great bottle for a very friendly price? A friendly price but at what costs? I never gave it a second thought, a bottle under €5,- and a great taste; I was the first to stock up in the supermarket. In 2013 a friend of mine mentioned a Human Right Watch report he had read about the living and working conditions of South Africa’s wineworkers. South African wine, a favorite. Reading that report made me wonder; how is strange, with all the supermarkets promoting how much they care about environment, animal welfare, sustainability and so on. What is the real story behind their cheap bottles of wine? Four months later in Januari I travelled to South Africa’s Stellenbosch area, looking for a farmworker who I would follow during the height of the harvest season. Was it really as bad as the report said or what? But how do you find a grapepicker, not as simple as I thought it would be. Not on the vineyards; farmers were not welcoming after the bad publicity. Somebody suggested a small all black community in the middle of the wine capital of South Africa; Stellenbosch. Every morning for a week I sat on the central square of the community where farmworkers were picked up to go to the surrounding vineyards. They looked at me with great suspicien, what is that white woman doing here in the early morning. After a few days some started greeting me, that is how I met Iwan Johanna’s neighbour. So glad he spoke English, I explained him why I was there; to document the real life of a farmworker, not the good or the bad, but just what is life really like. Six full weeks I followed Johanna around; the hard work on the vineyards, the daily struggle of just surviving. I photographed the life of a farmworkers community from close by; work, family life, alchohol abuse, drug addictions and having no hopes for a better future. I wish I could say also the happy side, but in Johanna’ s life there was no reason for happiness. Just to give you an impression; for the price of 1 bottle of cheap wine, Johanna and others have to work a full day. Hardly enough to survive, let alone make a living. When I left she cried, because she was afraind that me leaving would mean the abuse of her husband and childeren would start again. Driving around the vineyards I saw many familiar names of winehouses; I was surprised to find out that even the expensive winehouses do not pay the grapepickers a normal salary. Has it changed me? Yes. I still like a bargain. Though you never can be 100% sure the farmworker got an honest pay, if cheap, you know somebody had to pay for it.