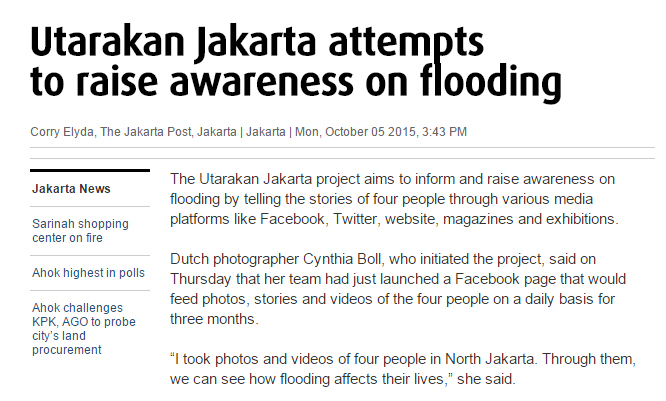 Interview Jakarta Post October 5th
After the launch of project The People Behind the Seawall. I was contacted by Indonesia’ s leading English language daily newspaper the Jakarta Post with a request for an interview. Friday morning I had a Skype interview with journalist Corry Elyda. We spoke about how this project started; how the majority of The Netherlands is lying below sea level but how we do ‘nt have to worry about the threat of water because of the measurements the Dutch government have taken. Why we focus on 18-35 young urban social media users as our target audience; they are the future and will be directly affected by the floods in the future. What our aim is with this project; to raise awareness about Jakarta is sinking and the urgency to act on it. And why we do think it is important, if nothing is done in 20-30 years time the city will be flooded for one third. Click the link to read the full article. http://www.thejakartapost.com/news/2015/10/05/utarakan-jakarta-attempts-raise-awareness-flooding.html